Story of rower who died in war uncovered by historian 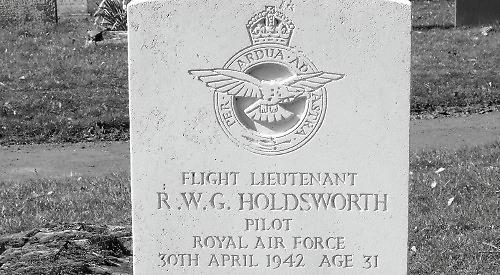 THE previously untold story of a Leander Club rower and RAF pilot who died in the Second World War has been uncovered by an amateur historian.

Mr Willoughby, who founded the Lest We Forget project, discovered that he represented Oxford three times in the Boat Race in the Thirties and stroked a Leander crew at Henley Royal Regatta in 1933.

He later joined the Royal Air Force and died in a plane crash in Northern Ireland in 1942, aged 31.

Mr Willoughby said Flt Lt Holdsworth was one of hundreds of rowers connected to Henley who became casualties of war.

He said: “There was in the region of 300 men who rowed at the regatta and died in the First World War. That’s similar to the figure of 311 men from Henley who died in the war.

“They were not just war casualties, they were blokes who never fulfilled their potential. A lot of them never got the chance to get married and have a family. They deserve remembering, every single one of them.”

Flt Lt Holdsworth was born in Kent in 1911 and was educated at Shrewsbury School and went on to Brasenose College, Oxford.

He joined the university air squadron and in 1939 was appointed dean of the college. In September 1940 Flt Lt Holdsworth married Mary Zvegintzov at St Peter’s in the East Church in Oxford. His best man was John Cherry, a fellow rower and Leander athlete who also went on to die in the war.

Flt Lt Holdsworth trained to be a pilot in north-east Scotland with Richard Hillary, another Leander member, and was then posted to 502 Squadron Coastal Command at RAF Aldergrove in County Antrim.

Mr Hillary went to Fighter Command and was later killed in the war.

Flt Lt Holdsworth had been posted to the Coastal Command Development Unit at RAF Ballykelly in Northern Ireland when he died.

On April 30, 1942 he was on board a Bristol Beaufort to carry out tests on a static line for dropping parachutists.

A parachute became entangled in the tail of the plane before it crashed in the grounds of the Tamlaght Finlagan Church of Ireland Rectory at Limavady. All three members of the crew were killed. The pilot, Flt Lt Archibald Duncan Livingstone and Obs Flt Sgt Stanley Frederick Chadwick were buried in Tamlaght Finlagan churchyard.

Flt Lt Holdsworth’s body was returned to England and his funeral service took place in University College Chapel, Oxford, on May 4, 1942. He was buried in Wolvercote cemetery.

He is remembered on the Lincoln’s Inn Fields memorial in London, the Brasenose College and University College memorials in Oxford and the Leander Club memorial in Henley.

Mr Willoughby said: “I had known about Flt Lt Holdsworth’s burial in Wolvercote Cemetery for a long time but, despite extensive research in all of the usual sources, no one knew how he had actually died. After much searching, I contacted a vicar in Ireland who shocked me by saying that he knew about the Holdsworth crash.

“In fact, he could look out of his study window as we were chatting and see the tree stump that the plane had crashed into.

“The concluding part of this story could not have been told without the invaluable help of Canon Harold Given of Tamlaght Finlagan Church and Jackie Thompson, one of Canon Given’s parishioners who came up with the details of the crash.”

Since its launch in 2013, Lest We Forget has erected several plaques honouring hundreds of previously forgotten servicemen who died during the First World War.

It has also rededicated the unmarked graves of fallen Henley soldiers and successfully campaigned for the town’s new hospital to be renamed Townlands Memorial Hospital.