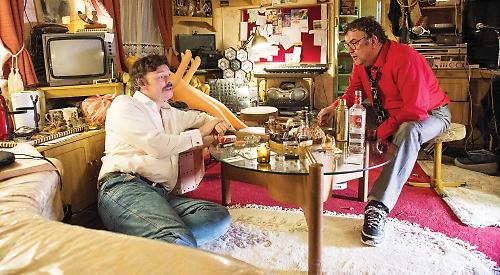 NO one does off-the-wall comedy like us Brits — and this week’s Mindhorn promises to be as eccentric as they come.

As a captured MI5 special operative, Bruce Mindhorn’s eye was replaced by a super-advanced optical lie detector, which meant he could literally “see the truth”. He escaped his captors and fled to the Isle of Man to recuperate in the island’s temperate microclimate — where he promptly became the best plainclothes detective the island had ever seen.

Decades later, when a deranged Manx criminal calls out Mindhorn as his nemesis, Thorncroft returns to the scene of his greatest triumphs for one last chance to reignite his glory days, professional credibility and even romance with former co-star/paramour Patricia Deville.

Mindhorn/Thorncroft is played by University of Reading graduate Julian Barratt, star of the hit series The Mighty Boosh, so expect plenty of bizarre asides here and of course a good dose of comedy.

With the help of Mighty Boosh co-writer Simon Farnaby, who co-writes and stars here, audiences can expect a fairly farcical 90 minutes in the cinema.

Our protagonist’s initial desperation to relive his past success and subsequent spot in the limelight ramps up the cringeworthiness no end, in a way that only the disillusioned can.

With a glut of summer blockbusters almost upon us, Mindhorn appears to be a refreshingly original attempt to offer cinemagoers something a little different.

The combined comic chops of co-writers Barratt and Farnaby hit peak bonkers in what is a strong contender for the funniest film of 2017.