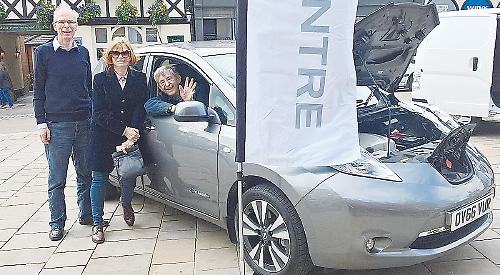 A COUNCILLOR has been billed £300 by her former council for organising a display of electric vehicles in Henley market place.

Joan Bland, a Conservative who was a member of Henley Town Council until 2015, arranged for the Nissan car and van to visit last month to raise awareness of alternatives to petrol and diesel vehicles.

She is a member of South Oxfordshire District Council and said she wanted to help tackle Henley’s air quality problem — levels of toxic nitrogen dioxide in the town centre are one-and-a-half times the maximum safe limit recommended by Air Quality England.

However, she failed to follow the town council’s procedures for using Market Place, so the Henley Tories will now have to foot the bill.

Councillor Bland, who failed to win a seat in last week’s town council by-elections, said she had asked the then Mayor Julian Brookes for permission to use the space.

However, a few days after the display, she received the bill for “unauthorised use” of the area.

Councillor Bland, who runs the Asquiths teddy bear shop in New Street, said: “I think it’s rather petty and it’s a sad day for Henley. I’m not a member of the town council, I didn’t know the policy and I asked the Mayor and assumed he had put everything in place. He gave me the dates that were convenient.

“I wasn’t doing it for the Conservative Party, it was as a district councillor and for the people of Henley. I was trying to help the town.

“I was going to invite all the other manufacturers of electric cars to come to the town and have a big jamboree at the end with all the cars for people to see because we need to sort out air quality. I must say I feel disillusioned with it at the moment.”

Cllr Bland said that at first she had thought the letter was a fake as it didn’t have an official an letterhead or display the town’s crest.

“It wasn’t signed by anybody and came in a brown envelope, delivered by a traffic warden as far as we know,” she said. “I thought ‘somebody’s being very childish and unnecessarily so’.”

“Market Place is not the Mayor’s property, it belongs to the residents of Henley, and we as officers are instructed to ensure that bookings follow the policies put in place by councillors themselves.

“We can’t discriminate on activities, whether it’s the Conservatives, Henley Residents’ Group or anybody else.

“The actual policy was put in place in April 2008 and approved by full council. Some of the councillors should have at least been aware or certainly inquired.”

Mrs Wheeler confirmed the letter was probably generated using a sales booking programme and added: “We can make sure it’s printed on headed paper next time.”

Meanwhile, Cllr Bland has pledged to spend £5,000 on setting up a car club in Henley. The money is the total sum of her allowance as a district councillor to spend on community projects.

She said the car club would take “lots” of cars off the road, adding: “I am directly trying to reduce pollution in this town.”