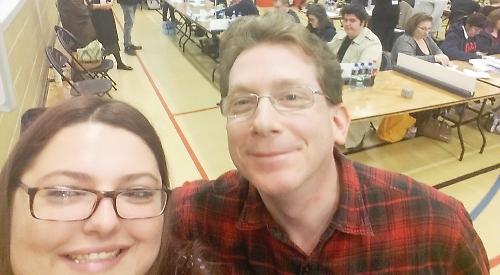 They took the two seats from the Conservatives, meaning that both parties then had eight seats.

However, HRG will run the council after securing a majority when
Conservative Lorraine Hillier revealed at mayor-making on Monday that she will now sit as an Independent Conservative.

HRG leader Gill Dodds, who is not a councillor, said she was thrilled at the size of the party’s victories.

She said: “There’s lots of HRG support out there as we are the people who do things — that’s the message we picked up on the doorstep.

“Our challenge over the next two years before the next election is to really get things done.”

The by-elections on Thursday were caused by the resignations earlier this year of former mayor Martin Akehurst, who quit for health reasons, and Dylan Thomas, who left because he had a new job with the civil service that requires him to be politically impartial.

The results were declared in the early hours of Friday following a count at White Horse leisure centre in Abingdon.

In the Henley North ward seat, former mayor Ken Arlett (HRG) topped the poll with 931 votes ahead of Conservative Joan Bland with 639 votes and Independent Donna Crook with 202. The turnout was 42 per cent.

In the Henley South ward seat, Glen Lambert (HRG) polled 1,167 votes compared with 691 for Conservative Yasmina Siadatan. The turnout was 41 per cent.

Mr Arlett, of Elizabeth Road, Henley, is a founding member of HRG but had not been a town councillor since he stood down in 2007.

He said: “It’s good to be back after 10 years — it was obviously my choice not to stand during that decade but the time was right to return. I guess it was a gamble for people going back to HRG but it will be worth it in the end. There is a lot of support out there as a lot of local people want change in a variety of areas, which we learned when we were knocking on doors.”

He added that the next few weeks would be “interesting”.

Ms Bland, who stood down from the council in 2015 but is still a member of South Oxfordshire District Council, said: “We didn’t get in and it’s a sad day for Henley. The people just didn’t come out and vote. While one’s ego is a bit dented because I lost, I can hold my head up high.”

“Every idea that the Conservatives come up with they will veto or turn into their idea.”

Ms Bland, who runs the Asquiths teddy bear shop in New Street, added: “All my friends are absolutely delighted, saying, ‘We’re so pleased you haven’t got in because we can see more of you!’”

Ms Crook, 42, of Abrahams Road, Henley, decided to stand as an Independent after not being selected by HRG.

She said: “I’m glad I stood because I felt I had to. I’m really grateful to everyone who voted for me.

“I wasn’t expecting to get anywhere really and I didn’t have any budget at all. I printed and delivered every leaflet on my own and it physically drained me.” Ms Crook, who has campaigned against bus subsidy cuts, said it was important that the Tories and HRG now worked together for the good of the town.

Mr Lambert, of Greys Road, said: “I’m honoured to have been elected by the residents of Henley.

“When I saw the size of the result I was quite overwhelmed, to be honest — I had to sit down! I didn’t expect such a comprehensive win.

“I felt I would win because the response on the doorstep was so overwhelmingly positive when we were canvassing. I’m extremely delighted that HRG has the trust of the town.

“There were a number of concerns raised by people on the doorstep. I think the town is very clearly opposed to care homes where houses were designated in the neighbourhood plan.

“Potholes were also high on the list of people’s priorities as a major
bugbear.”

Mr Lambert, a father-of-two, who works in IT, is HRG’s membership secretary and stood for election to the town council in 2015 but was unsuccessful.

He said: “The first thing is learn how to be a town councillor!”

Ms Siadatan, a mother-of-two who lives in Harpsden Road, said: “I am disappointed for myself and for the Conservative party, of course, but Glen’s a brilliant candidate. He’s going to do a good job so I’m really pleased for the town.

“It’s a shame that it has become eight-all because you are going to have a lot of stagnation, which is the last thing the town needs, but that is democracy.

“They all want better roads, to fix potholes, the best social services for the elderly, to protect people in social housing and get more affordable housing for young families and there’s very little difference in their manifestos.

“I think there’s a lot more room for co-operation on the council and harmony.”

Ms Siadatan, a former winner of the BBC’s The Apprentice, added: “Everyone was kind to me on the doorstep.

“I would like to thank absolutely everybody I spoke to who gave me ideas about how to improve the town and to thank the people of Henley.

“I was taken aback at how open people were to talking about their community and what they like and don’t like — it was a real eye-opener and a hugely positive experience for me.”

The Conservatives won control of the council in 2015 for the first time in 12 years, taking nine of the 16 seats. HRG had run the council since 2003.

Last year, the Tories strengthened its grip on power when Councillor Sara Abey defected from HRG.

Former town councillor Dieter Hinke, chairman of Henley Conservatives, said: “The election results in the town had produced a town council that would have been politically balanced and gave this council an opportunity to move away from the divisive model of many past years and force some consensus on the two sides of the political spectrum.

“This was something which has rarely been tried before, although some of the Conservative councillors in the last two years have been more accommodating in this respect than any council in the last 20 years.”