Hawks fly into schools to spot star players of future 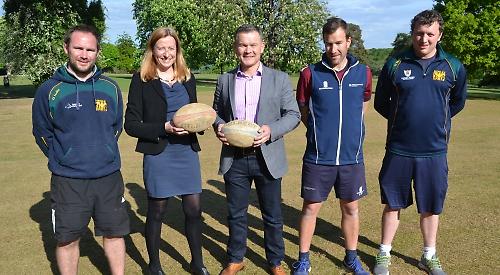 HENLEY Rugby Club is to hold taster sessions at schools in a bid to attract more youngsters.

The 12-week Player Reach Out Programme, or PROP, will start in the new school year in September.

Pupils will be given skills coaching and taught exercises to build their confidence and understanding of the sport as well as playing matches.

The primary school sessions will be aimed at year one and two pupils of both genders and held twice a week. At Gillotts there will be four sessions a week for boys in years seven and eight at lunchtime and sport lessons run by Tom Haynes, one of the club’s academy coaches.

In the tenth week there will also be a tag rugby festival at Dry Leas in which all the schools will be invited to take part.

The club hopes the sessions will help its coaches to spot potential future players for the Hawks.

Youth coach Nick Bradbury said: “We identified some things we weren’t doing as a club, one of which was getting more involved with local state schools. We have amazing facilities at the club and want to make sure as many children as possible get the opportunity to come down and see it.

“We are focusing on years seven and eight at Gillotts because that’s where we have children who are either dropping out or haven’t tried rugby.

“If we don’t have 70 per cent of the youth teams coming from Gillotts we won’t be able to put teams out.

“People are leaving the club because other clubs have three or four schools to feed into them and have more teams. If we can identify three, four or five extra players a year to come through to the Hawks it could mean a team continuing.” The scheme will be supported by Gillotts PE teacher Luke Harding and Performance Sport, which is run by Chris Ellison, a former cricket professional and youth coach.

Gillotts headteacher Catharine Darnton said: “We are pleased because as a relatively small secondary school, we can’t offer everything.

“We are incredibly lucky in Henley to have so many other organisations with offers, whether it’s drama, art, cricket or rugby.

“As a school, it makes sense to foster links with the outside. The idea that kids might get ‘spotted’ is quite exciting.”