Shopkeepers agree to close their doors and keep out air pollution 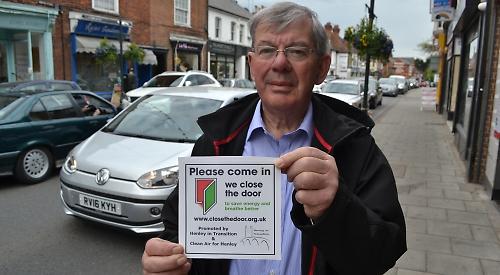 A CAMPAIGN to persuade shops in Henley to close their doors to save energy and protect staff and customers from air pollution has got off to a good start.

Environmental campaign groups Henley in Transition and Clean Air for Henley are asking retailers to take part in the national Close the Door campaign, which was launched in Cambridge five years ago and has since expanded to seven other towns and cities.

The organisers have so far visited more than 40 shops in Reading Road and Duke Street and many traders have said they are happy to display a sticker in their window explaining to customers why the doors are closed and that the business is still trading.

The sticker reads: “Please come in. We close the door to save energy and breathe better.”

David Dickie, a member of Henley in Transition, is pursuing the idea in a bid to improve air quality in the town centre, where the levels of toxic nitrogen dioxide are up to one-and-a-half times the maximum safe limit recommended by Air Quality England.

Mr Dickie, of St Katherine’s Road, Henley, said: “The Close the Door campaign is designed to get business backing for initiatives to make Henley special.

“When I walked along I was encouraged by the number in support. I would say about 20 were displaying the stickers and another 15 were talking positively about the idea. There is still much to cover in the coming weeks but there is great encouragement from retail staff and owners to get things done.

“They know they suffer from noise and from pollution coming in, affecting their health, and they wish Henley could be a better place.

“It’s about protecting staff and customers in much the same spirit as the 2007 smoking ban. You can’t see the pollutants that are emitted by vehicles but it’s a far bigger public health issue than smoking, which is adults making their own decisions to some extent whereas this is something we’re forcing on our children.

“One shop, Central Home, wrote to Henley in Transition asking for a sticker before the programme began. This enthusiasm is most welcome but is driven by the noise and air pollution in Reading Road where open doors are mostly a thing of the past.

“Overall a high percentage of retail outlets keep their doors closed because it is disturbing to have the noise and air pollution.”

Mr Dickie and his team, Gerda Barraclough, Val Stoner and Julia Carey, planned to visit retailers in Market Place and Hart Street this week and will go to other streets in the coming weeks.

He added: “It’s a great opportunity for Henley to be different to other market towns and to make it special and unique.

“I want the town council to realise that shopkeepers and retailers actually want something done as well. They know more about the problem than they have been given credit for.”

Jason Kempston, who owns the Sole Man in Duke Street, said: “I’ve been here for 17 years so I can remember when it was two-way traffic sitting in front of the shop.

“When they made the one-way system the idea was that would reduce the amount of standing traffic but you get big buses or coaches sitting there and the exhaust points right at my door, pouring in diesel fumes.

“Touch wood, my health’s fine. Time will tell won’t it? But whether I’ve got health effects from it or not, another approach needs to be taken.”

Alan Mann, owner of Henley Sports on the corner of Reading Road and Greys Road, said: “I’ve always known pollution is high around this area. When I’ve had the the doors open in the past you can see a noticeable difference in the carpet colour. There’s a lot more of what looks like dust accumulating on things so for quite a few years now I’ve kept my doors shut.”