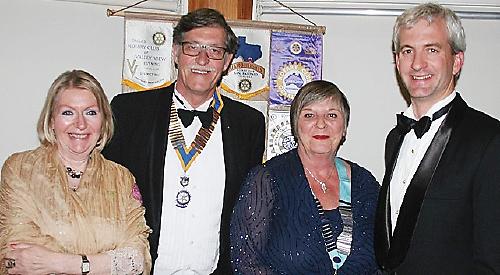 The Rotary Club of Henley Bridge celebrated its 35th anniversary with a dinner at Hennerton Golf Club, near Wargrave, writes Annie .

Guests included the president of the Loddon Vale Rotary Club Dennis Turner, past members Carol Ponchard and Roger Dyer and a friend of the club Michael Humphries.

The speaker was Jesse Elzinga, headmaster of Reading Blue Coat School in Sonning, with a talk called “One Rotary scholarship and two trips to Henley: a headmaster’s journey”. He is from Detroit, where he attended a large state school and is its only student to gain a place at Harvard.

At he captained the lightweight eight which twice won the national championship. He then won a Rotary scholarship to Oxford where he obtained a Master of Studies degree. Mr Elzinga said this had allowed him to travel and extend his studies, giving him a path to a whole new world.

He has spent his working life in England and said he was pleased to be the head of a school with a rowing pedigree. His talk was fascinating and prompted many questions and a great deal of laughter.