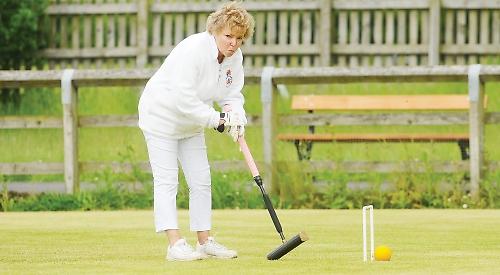 Colman dropped her first game against Watford’s Andre Michel but bounced back for a winning run that culminated in a single point victory over fellow Phyllis Court member Peter Haydon.

The last win made all the difference and Colman took first place to record back-to-back tournament victories at Hurlingham.

Meanwhile there will be no run in the national second tier inter-club Murphy Shield golf croquet competition for Phyllis Court this season following a crushing defeat at Hamptworth, near Salisbury.

Peter Haydon and Raymond Wood won their morning doubles match but the hosts won the rest bar one unfinished match that was halved.

Some close results were no consolation for this Phyllis Court team whose first round exit is a far cry from their appearance in the competition’s national final two years ago. Phyllis Court C went top of the Southern Croquet Federation GC Handicap League last week with an 8-4 victory over division newcomers Basingstoke.

Delia Norris was the star turn, winning both her singles games, after Raghu Iyer’s team took a lead in the earlier doubles rounds that they never relinquished.

In contrast to Phyllis Court C team, the club’s B team are still looking for their first win after a narrow loss at Blewbury last week.