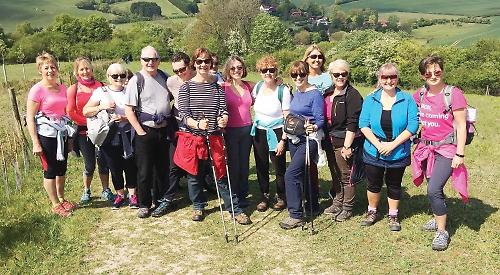 A CHARITY walk through the South Oxfordshire countryside raised £777.49 for breast cancer research.

Eighteen people took part in the 16-mile challenge, which set off from Market Place in Henley on a Sunday morning.

They walked up Fair Mile and followed a circuit through Lambridge Wood, Bix and the surrounding countryside before returning to Henley for a lunchtime picnic in Mill Meadows. The group then continued along the Thames towpath to Shiplake before walking back to Henley via Harpsden.

Proceeds from the day will go to Walk The Walk, which organises charity challenges across the country in aid of breast cancer research.

It was organised by Clare Stacey and Jess Hill, who are head receptionist and dispensing optician at Bunker Opticians in Duke Street, Henley.

The pair had hoped to take part in the charity’s annual Moonwalk in London ob Saturday but the day clashed with other commitments so they arranged their own event.

Participants included regular customers as well as family and friends. Miss Stacey said: “Everybody knows someone who has been treated for cancer so the subject is close to everyone’s hearts and it seemed a good cause.

“It was a fantastic day. Everyone was really happy the whole way around and it was a chance to meet new people.

“I’ve had a lot of requests to do it again so I’m hoping to hold it every year and get more people involved.”