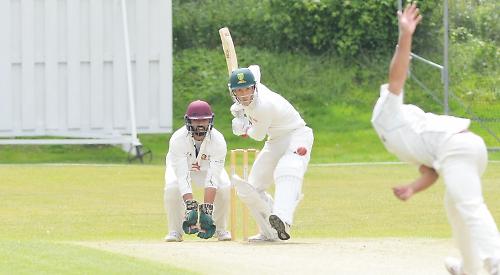 HENLEY got their Home Counties Premier League Division 1 campaign up and running with their first win of the season against BURNHAM at the Brakspear Ground on Saturday.

Being well versed in the vagaries of the morning climatic conditions in the Thames Valley, and its effect on seam bowling Burnham, on winning the toss, had no hesitation and inserted the home side.

Skipper Michael Roberts and his opening partner Matt Rowe proceeded steadily against the pace of Haroon and Singh. With the score at 30 Rowe skied Singh and slightly miscued his shot to be caught at mid-off.

Joined by Euan Woods, the Henley skipper proceeded to punish the bad balls before Woods was bowled for 23 in the 19th over with the score at 82-2. Roberts was then joined by Richard Morris, the former soon reaching his 50 to bring up 100 in 22 overs. Morris also reached his half century before Roberts fell for a skilful 89, trying to force the pace with the score at 168-3. His innings featured some good boundaries which were well struck off both the front and back foot.

Davison and Ashraf now tried to force the pace but the innings became becalmed as the overall skills of the Burnham bowlers allowed the Henley batsmen little leeway to score quickly, Khan and Raja bowling their 20 overs for a mere 87 runs.

All Henley batsmen made useful contributions in the context of the game but several of the cognoscenti from beyond the boundary were of the view that the final total of 255-7 from their 50 overs might not be sufficient to bring success against a strong batting side. The nemesis of many of the Henley batsmen was largely brought about by a period of self-destruction based on slogging rather than sticking to their obvious strong batting skills.

After the break, Burnham responded in a similar vein to the home side scoring at a comparable rate before the first wicket fell at 48 to Ziafat Ashraf. At 71-1, Burnham appeared to be in control of proceedings before three wickets fell in rapid succession to Russell’s pace and Woods’s off breaks.

At this stage the Burnham innings became becalmed as Ashraf bowled his 10 overs for a meagre 30 runs before Woods dismissed Gandan to a fine catch by Rowe.

The dangerous Basran then joined the fray to change Burnham’s approach to the game. He proceeded to score a rapid 55, including 46 runs in boundaries and was well supported by Singh who likewise scored a well struck 62 in an hour.

At 174-4 Burnham looked well placed to bring victory to the away side. However, the Henley pace attack then came to the fore with Tahir Afridi, Nugent and Russell claiming the last five wickets as Burnham were dismissed for 237.

Particularly impressive was the bowling of Russell who demonstrated the value of bowling straight, finishing the Burnham innings with figures of 4-49 including two clean bowled victims in his final over.

Henley well deserved their victory on the day and it was particularly pleasing to see the good fielding which supported the victory. In all, seven catches were taken, six of which were outstanding. However, 12 wides were bowled during the Burnham innings, the equivalent of giving the opposition two extra overs. This is a luxury which Henley can ill afford and could lead to their nemesis in the future.