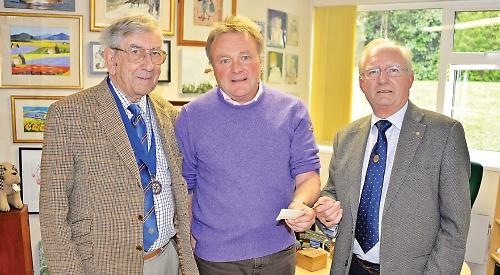 THE club has donated £1,000 towards the refurbishment of a rundown rural hospital in Africa.

It presented a cheque to Dr Philip Unwin, who is a GP at the Hart Surgery in Henley, and the founder of Kamuli Friends, a charity which is rebuilding a ward at Kamuli Mission Hospital in Uganda.

Since its launch in 2012, it has built new nurses’ accommodation and added a guest house and covered walkway.

It has also set up a scheme in which doctors and nurses can volunteer to help at the hospital for up to six months.

The Rotarians raised the money at a charity auction held at Henley Golf Club earlier this year.

Dr Unwin said: “We’ve almost hit our target for the new ward but there’s still a little way to go so donations such as this are amazingly helpful and very gratefully received.

“We are very thankful for the club’s long-standing support for our charity.”

Another £1,000 raised on the night will be donated to the Thames Valley Air Ambulance.

Barry Prior, chairman of the club’s international committee, said: “The auction was a great evening which everyone really enjoyed.

“It was a great way of raising money for two very deserving causes.”