Afridi hits boundary to earn Henley a share of the spoils 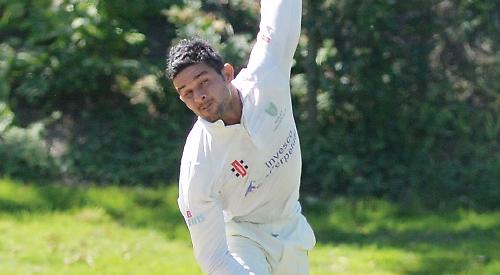 TAHIR AFRIDI struck a boundary off the only delivery he faced all afternoon to earn visitors HENLEY a tie in their Home Counties Premier Division 1 clash at BANBURY on Saturday.

Banbury, now captained by Lloyd Sabin were boosted by the arrival of Pakistani overseas signing Aizaz Cheema who, at 37 years of age, made his debut last weekend having previously played in seven tests and 14 one day internationals.

On winning the toss, Henley captain Michael Roberts had little hesitation in inviting Banbury to bat. Conditions were cold, windy and with a real chance of rain – hence the possibility of a Duckworth Lewis intervention.

Losing both openers and another wicket all to the pace of Tom Nugent, Banbury were in real trouble at 29-3 when captain Sabin was joined by West. Beginning slowly but gathering momentum both batsmen played with skill and common sense building a partnership of 138 before both fell for 77 and 76 respectively.

The Banbury tail offered little and fell cheaply in the quest for quick runs with the innings closing on 195-7 in the allotted 50 overs. Nugent with 4-32 and Tahir Afridi with 2-33 were the pick of the bowlers, offering far greater discipline than in the two previous outings this season. The spin attack, although not expensive, looked innocuous and lacked penetration on a slow and low wicket.

Following an extended break between innings due to a rain shower, Henley began in pursuit of a winning total on a testing surface.

Matt Rowe and Roberts perished to opening bowler Taylor. Scoring was proving difficult for Euan Woods and Richard Morris as they endeavoured to rebuild. Their partnership of 89 was broken when Morris chipped the persistent West to short mid-wicket and wicketkeeper Davison fell soon after.

When Woods was eventually out trying to force the pace, for a mature and well-crafted 83, 11 runs were required off the final over.

Cometh the hour, cometh the man and Ziafat Ashraf had played an innings of controlled aggression and once again proved the man for a crisis as he added to the visitors total.

With five runs needed off the final ball, Henley needed six to win or four to tie bearing in mind that a five was highly unlikely.

In strode Afridi to face his only ball which he smote for four – oh so nearly a six – and amidst great excitement the match was tied.

This was a fair result between two teams who will surely be in the mix at the end of the season.