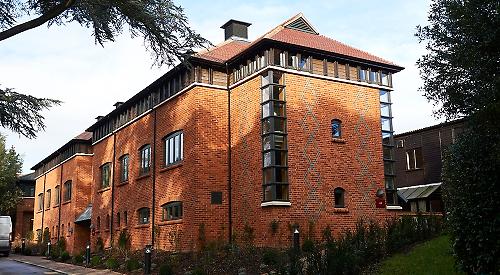 A £2 MILLION winery in the Stonor Valley has won this year’s Chilterns Buildings Design Award.

The building at Hundred Hills Vineyard in Pishill, which is run by Stephen and Fiona Duckett, was designed by architects Nichols Brown Webber, of Northend.

The judges said the building “significantly enhances the site and locality and completely harmonises with its setting”.

They praised the use of high- quality local materials, the attention to detail and, above all, the building’s relationship to the special character of the Chilterns.

The Ducketts bought Bank Farm in February 2013 after selling their house in Oxford.

They received planning permission for a vineyard and winery in 2014 and hope to have their first wine ready in 2020.

“We’re obviously delighted to have our work recognised. We have worked on it for three or four years together with the architect. It has been a long time in the design and making.

“The winery is designed to have a very strong Chilterns feel but inside it’s very state-of the-art. There are multiple cooling systems. The building is going to be integral to the way we market and sell our wines around the world. We’re trying to make very high quality English sparkling and we want it to be deeply authentic and of its place.”

The second phase of the project will involve the creation of a number of outbuildings which will be used for storing wine and equipment used in the manufacturing process.

The third phase will be to build a Chilterns farmhouse with the intention of hosting people visiting the winery and vineyards.

Mr Duckett added: “It’s a 20-year project to make world class wine and we think of ourselves as seven years in. We began searching for the land to make great wines seven years ago so we’re a long way in but we have a long way to go.”

Ian Brown, a partner at Nichols Brown Webber, said: “We were very pleased that the building has been acknowledged in this way.

“It was challenging technically. There were issues that we worked through with the clients and the contractor.

“In terms of the way that the building has been fitted into the site and the Stonor Valley, we led with our ideas on that.

“As far as the workings of the winery and the brief is concerned, Stephen and Fiona were involved in briefing us on the technical requirements.”

The Ducketts will receive a blue plaque at a celebration at the winery on June 15.

Another building designed by Nichols Brown Webber was among the buildings to be commended — the £4.3 million arts block at Shiplake College. The John Turner building, which opened in September 2014, houses the college’s music and art departments and has a 140-seat lecture theatre.

The judges said they were impressed with the way the building sat within its setting, the landscaping, intricate details and its strong eco-credentials.

Mr Brown said: “Again, it was technically quite challenging because you have got to deal with acoustics and getting the right conditions for the artists in terms of lighting.”

Headmaster Gregg Davies said: “The John Turner Building is now in the heart of the college, flooded with natural light, with state-of-the-art facilities and is, at any time of day, a hive of activity, individual study and collaborative learning.”

The annual awards are run by the Chilterns Conservation Board and Chiltern Society to encourage and recognise new buildings which make a special effort to reflect and complement the landscape of the Chilterns Area of Outstanding Natural Beauty.

This year eight buildings were shortlisted for the award. The runners-up will receive certificates.

l Shiplake College has submitted plans to replace the roof of its sports hall. The college says the existing roof has reached the end of its life, although the hall is still being used for sport and exams. If it is approved by South Oxfordshire District Council, the work will be carried out during the school summer holidays.