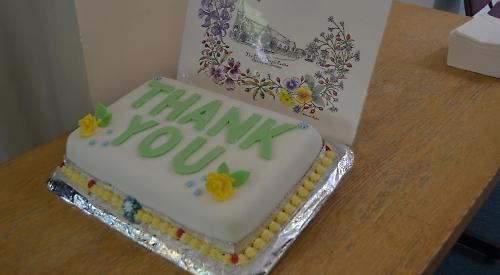 A SPECIAL celebration was held to mark the closure of an appeal fund that enabled the creation of the Christ Church Centre in Henley.

About £2 million was raised for the building project, which included a covered concourse and the addition of modern halls and a small chapel at the United Reformed Church in Reading Road.

The centre opened in 2000, five years after the fund-raising drive began when the church decided that it should use its buildings to serve the community.

Money came from the congregation, charities, trusts and local authority grants as well as the church’s own fund-raising efforts.

The church also received a loan from URC funds. This was paid off at the end of last year thanks to an anonymous donation of £38,000 and the fund was then closed.

The church marked the occasion with a Sunday service, which was followed by tea, cake and strawberries for those present. Children let off balloons outside.

Rev Glyn Millington, minister at Christ Church, said: “People from Christ Church have given consistently, generously, sacrificially and faithfully, some over the entire length of the project. Many have been hugely generous with their time, energy and imagination as we have raised money in different ways.

“Some have been generous with their skills and experience, organising it all and seeing it through from inception to the closing of the fund.

“We owe a special debt to the members of our finance and fabric committee past and present and also to the centre management committee who, with our centre managers, have developed the work of the centre so effectively.

“I should name specifically David Grubb, who has masterminded the external fund-raising with great imagination, sensitivity and effectiveness, Tom Carberry, who oversaw the building work, and Michael James, who has overseen our finances to such good effect.

“To name those three, though, is not to ignore or belittle countless other contributions.”

The centre was built in two tranches, firstly the concourse and the external work and then the Kempster and Haymes halls.

Rev Millington said: “When we started developing the building they decided to completely re-order the church property so that it was more useful for the community.

“It involved moving the graveyard and putting a driveway through and converting the manse garden into a car park.

“They built most of the rooms at the back of the church and completely gutted and refurbished the buildings that were originally there. They made it accessible for wheelchair users. What it has done is enable us to offer a facility to all different sorts of groups from Henley and within the community.

“I think that’s important. You take this business in Manchester. There are so-called religious people who are doing their best to tear the community apart so having places where every kind of group within the community can come and share the space is quite significant and important.

“If nothing else it provides literally common ground – it’s a space they all use. We have Alcoholics Anonymous through to the brownies, the stroke club, the University of the Third Age and the National Childbirth Trust. We’re not in the habit of turning people away.”

Groups pay to hire rooms at the centre.

Rev Millington said: “It has to pay its way. The church couldn’t afford all of those buildings and the staff needed to run them without a contribution from those who use the place. We offer special rates for charitable groups and groups that work with young children.”

He added: “It’s very exciting to have that great fund-raising drive behind us and now we move on to developing our services to the community more broadly.”