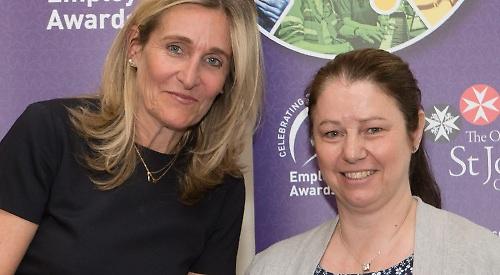 A WOMAN has been honoured for her service to elderly people in Henley.

Denise Hayes, who works at the Chilterns Court Care Centre in York Road, was presented with the unsung hero of the year award by her employer, the Orders of St John Care Trust.

The 53-year-old, who lives in Bix with her partner Paul Woodley, joined the charity in 2008 and originally worked as a night care assistant at the Chilterns End care home, off Greys Road.

Over time she became a moving and handling trainer, teaching her colleagues to safely help residents with daily tasks such as bathing, sitting, standing, walking and getting in and out of bed.

She also took on the role of dementia leader, which involved organising activities for residents with the disease and finding ways to keep their minds and bodies active.

Shortly before Chilterns End shut and the residents moved to the Townlands health campus last year, she was promoted to care leader and now has overall day-to-day responsibility for the residents’ health and wellbeing.

Ms Hayes, who grew up in Vicarage Road, Henley, and attended Trinity Primary School and Gillotts School, was nominated by three colleagues. The award recognises staff who have consistently gone above and beyond the call of duty over many years.

Ms Hayes was presented with an engraved glass trophy, a certificate and a box of chocolates by Millie Wentworth-Stanley, deputy chairwoman of the trust’s board of trustees, at a ceremony in Oxford.

Ms Hayes, a mother of three grown-up children, said: “The trust is a lovely organisation to work for. You get lots of chances to progress and there is lots of training available and the managers and staff are lovely.

“I like to know that I’m making a difference in residents’ lives and helping them to participate in things that they enjoy. Life doesn’t have to stop with dementia and I enjoy helping people live to the best of their ability. I was honoured to win an award. I feel like I’ve just been doing my job but my colleagues and family are very proud.”

Maggie Coleman, the care centre’s new manager, said: “This is a well-deserved award. I have only been here for a month but Denise has shone through as someone who puts residents’ welfare above everything else.

“She’s the first person you’d turn to for extra support or just a nice chat, which is a rare quality these days.”