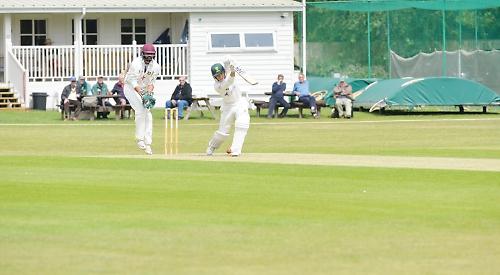 HENLEY continued to misfire at the start of the Home Counties Premier League season with a loss at home to FINCHAMPSTEAD on Saturday.

Despite plenty of positives to take away from the game, notably Captain Michael Roberts’s 120 and Zia Ashraf’s 3-32, Henley will rue the opportunity to capitalise on a good start to their batting innings.

Having won the toss on a balmy morning with sun forecast for the majority of the day, Henley decided to get first use with the bat on what was a relatively used wicket at the Brakspear Ground.

Although three maidens were bowled up-top by the dangerous Coetzee and Carter, it didn’t take long for Matthew Rowe and Roberts to get into their stride.

Both batsmen took advantage of anything loose, executing a wide range of stroke play, with Rowe being the aggressor against the early introduction of spin.

Roberts accumulated at the other end and their complementary batting styles brought the 100 up in 20 overs.

Despite losing Rowe on the stroke of drinks for a fluent 53, Richard Morris’s injection of dominance against the spin and speed between the wickets ensured Henley’s good start continued.

Having reached 50, Roberts went through the gears, feasting on the reintroduction of seam and began to open his shoulders against the spinners.

This left Morris poised at the crease, with Henley in a strong position on 208-2 and set to easily go past 300.

However it was not to be, as a batting collapse, reminiscent of years gone by, came back to haunt them.

The in-form Euan Woods fell first ball, before Morris and Ziafat Ashraf fell in quick succession, the former caught in the deep off a ball which got stuck in the pitch, and the latter guilty of a poor run out.

Despite efforts by Davison to anchor the latter part of the innings, a lack of application ensured that wickets continued to tumble.

Keegan Russell and Gurveer Singh attempted valiantly to bat out the innings but it should never have been their responsibility to do so and Henley capitulated to 237 all out, losing eight wickets for 29 runs.

At half distance, Henley’s total was under par but the match was still in the balance, with a wicket beginning to deteriorate and a bowling attack capable of First-Class performances on its day.

In the event, the game went down to the wire and the Henley side can hold its head high by taking the game right into the final over. Tom Nugent and Tahir Afridi started well, with the former accounting for House caught behind by Davison.

However, under no real pressure to score, Finchampstead’s batsmen could quietly go about their business and despite being left on 64-2 after Smith was adjudged lbw to Woods’s first ball, this only served to kick the innings into life.

Berkshire’s Lincoln came to the crease and played one of the more belligerent innings seen at Henley for some time.

In partnership with the dogged Rogers, Lincoln helped Finchampstead into an authoritative position in the game, requiring to go at less than a run a ball with 90 to win once he departed for 61 off 43 balls.

However, with the departures of Rogers and Lincoln Jnr in quick succession, Henley were back in the game and it took some slow accumulation by veteran Gary Loveday and Finch’s overseas Coetzee to bring Finchampstead back on to an even keel.

After Coetzee’s dismissal, Finchamspstead required 42 to win but thanks to run-outs by Russell and Oldershaw, coupled with excellent glove work by Davison, Finchampstead were again reeling as the game crept into the final overs.

Although Henley’s death bowling was tight, and showed that anything over 275 would have been out of reach, Finchampstead required only three runs off the remaining six balls.

Up stepped Berkshire legend Loveday, who showed composure and maturity matched by his age to steer the away team to victory, with a straight maximum to win the game by two wickets.

A thrilling game for the impartial observer but a frustrating one for the home side, whose batting display fell short of the championship winning credentials often associated with Henley.