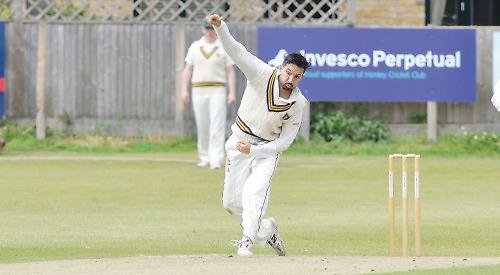 HENLEY bounced back from last week’s defeat against Finchampstead with a convincing victory away at HIGH WYCOMBE, putting in a first-class performance across all disciplines and completely outplaying the former Home Counties Premier League Division 1.

Having struggled to piece together a performance reflective of the team’s capability in its first four games, Henley set the bar high on Saturday and will be eager to replicate similar performances going into the longer format games starting next week.

On a hot day at the London Road ground, which invariably produces pitches of an extremely flat nature, High Wycombe captain Nathan Hawkes won the toss and surprisingly decided to bowl.

Henley’s successful opening pairing of Roberts and Rowe stamped their authority on the game from ball one, setting the tone for the rest of the innings. Both batsmen scored freely, showing dominant stroke-play when the ball was pitched up, whilst being ruthless on anything short, ensuring neither Wycombe’s opening bowlers nor their spinners could easily settle. Both openers brought up their half centuries in quick time, taking Henley to 121 for no loss after 25 overs.

Although scoring slowed a little in the middle-overs, perhaps accounting for Rowe’s dismissal at long-on in an attempt to up the rate, Henley’s new recruit Waqas Hussain entered the fray and showed what an asset he will prove to be this season and beyond. Having missed the first four games due to a hand injury sustained whilst playing in Australia, Hussain showed no signs of rust, as he played his way in before tearing Wycombe’s attack apart, allowing Roberts to anchor the innings at the other end. Hussain mixed power with precision, bludgeoning the ball to the boundary when the opportunity presented itself, whilst easing the ball over the ring-fielders to balls which most other players would have defended.

By the time Hussain departed for 74 off 60 balls, his stand with Roberts had reached 140, with the latter quietly accumulating a third ton in three games, leaving Henley on 271-3 with seven overs remaining. Skipper Roberts departed two overs later for a match-defining innings of 149 off 126 balls with more than 100 runs of his innings coming from boundaries with 22 fours and three sixes. Henley’s middle to lower order, with the help of the experienced Barnes, made certain that no mistakes from the previous week were repeated as the innings closed on 325-8 after 50 overs.

Although an imposing total, a par score at London Road is always hard to discern and with a strong batting line-up lying in wait, Henley would have to be at their best to extinguish any hopes of a successful run chase.

The Wycombe innings started quickly, with both openers Casterton and Baker showing intent from the outset. With the dangerous Baker caught by Hussain at mid-on off the bowling of Nugent, and Afridi showing his class with a tight opening spell at the other end, Wycombe were under pressure early despite reaching 84-1 off 16 overs.

Even with Singh and Woods missing due to injury, Henley are rarely short of quality spinners and the trio of Ashraf, Rowe and the returning Brock proved to be simply too good for Wycombe.

First, Rowe accounted for Castleden, expertly caught by Russell at deep square-leg, before Ashraf snared the dangerous Hawkes, caught behind by Davison.

From then on Henley tightened the screw with wickets falling at frequent intervals. Brock, following Ashraf from the bottom end, showed his mettle, bowling a mature spell and setting fields which meant scoring was hard to come by.

With the exception of Duncan, who played well for 44, none of Wycombe’s batsmen threatened and once the dogged Casterton was stumped for 76 off the bowling of Ashraf, Wycombe were in trouble on 166-6 off 37 overs.

Henley wrapped up the innings just six overs later, with a convincing run-out by the visitor’s best fielder Brock, who personified Henley’s passion and execution in the field.

Although Henley’s performance was outstanding, it was one well within this group of players’ potential and ultimately will need to be repeated throughout the season if they wish to be title contenders.

After the game, Roberts said: “Only now have we shown what we are capable of doing. However, we start again next week against Oxford, who are going well at the top of the league. If we continue to show the same attitude, energy and focus in the forthcoming declaration games, we are confident of being in a good position once the 50-over format returns with four fixtures to go.”