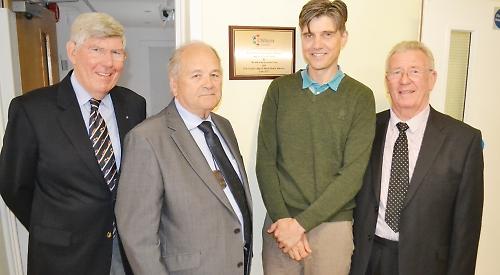 A NEW £20,000 sensory room has opened at Henley’s Chiltern Centre for disabled children.

The facility was refurbished and new equipment added thanks to a £14,500 donation from the Mark Benevolent Fund and the Grand Lodge of Mark Master Masons.

The centre, off Greys Road, used about £5,000 of its own funds to carry out building work before refitting the room where children can explore all five senses.

It features a wall of different textures, a pressure-sensitive floor, an interactive touch pad which emits smells, a ball pit and a “never ending” lightscape — a tunnel with different coloured lights.

Centre manager Keith Manning said that after meeting families and children using the centre they realised there was a need to update the room.

He said: “It’s about trying to encourage stimulation for children who, in many ways, their only world is experience through sensory. The real test of this is the facial expressions on the children’s faces — it’s wonderful to experience it.”

One of the first children to try out the updated room was a wheelchair user who was able to create music on the pressure-sensitive floor, set out as a piano. Mr Manning explained: “It seemed to me what this had brought to him was this ability to create this music without anybody essentially supporting him to achieve that. It was, what I would say, him being independent.

“It’s a safe space. It’s not just for one or two people, we can comfortably fit three to five people in this room. Having children choose equipment also creates a sense of ownership.”

Paul Barrett, the centre’s chairman of trustees, said the charity was “enormously grateful” to the Mark Benevolent Fund for providing the funding and described the room as “an empire of the senses.”

He added: “It’s been a project on our books for a year or two and we have been waiting for the cash to come in. What they have done is transform what we had before, which was a bit tired and uninspiring.

“We’re really pleased with the result. More importantly, the children or young people who use this are really thrilled with it.”

Because of its donation to the project the new space has been named the Mark Benevolent Fund Sensory Room.

Meanwhile, the centre is in need of new care staff to help expand its services. At the annual meeting on Monday Mr Barrett said the centre was in a healthy financial situation but part of that was due to low staff numbers. He said: “It’s been a struggle at times to raise the money we need to make sure we can open our doors in January.

“Since Keith Manning has come on board our policy of opening for an extra night has increased revenue. That takes the pressure off our need to subsidise revenue with fund-raising, which is still important but less critical than past years.

“We have seen strengthening of our finances and that looks set to continue. One reason for that is because we haven’t managed to recruit to our budgeted head count. It is proving very difficult to attract and retain care staff. We have considerable demand for services and we could do more if we had the staff to do it with.”

Mr Barrett also praised several directors of the charity who stood down this year.

Mr Barrett said: “We are hugely grateful to all our trustees who have served this place and continue to do so. We look forward to the input we are going to have from new trustees.”

Among those to attend the meeting were Henley Mayor Kellie Hinton and South Oxfordshire District Council chairwoman Jeannette Matelot.