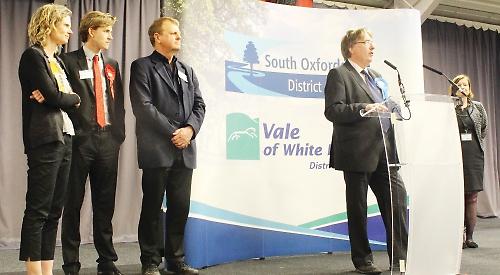 JOHN HOWELL has been re-elected MP for Henley.

The Conservative was declared the winner of this year’s general election at 4.56am on Friday last week with a slightly reduced majority.

Two years ago, Mr Howell had a majority of more than 25,000 votes while the turnout was lower at 70.3 per cent.

Mr Kavanagh, who was standing for Labour for the first time, attracted 11,455 votes, an increase of more than 4,500 votes than Sam Juthani, who stood for the party two years ago.

Robin Bennett, the Green Party candidate, came fourth with 1,864 votes, fewer than half of the votes his party colleague Mark Stevenson attracted two years ago.

In fifth place was UK Independence Party candidate Tim Scott, who attracted 1,154 votes. This was a significant decrease on 2015, when 6,007 people voted for UKIP’s Christopher Jones.

Patrick Gray, of the Radical Party, which was standing in the constituency for the first time, received the fewest number of votes with 392.

Nationally, the election resulted in a hung Parliament after the Conservatives won 318 seats, eight short of the number required for an overall majority. They previously had 331.

The party looks set to form a Government after striking a deal with the Democratic Unionist Party, of Northern Ireland, which won 10 seats.

Prime Minister Theresa May was re-elected as Conservative MP for Maidenhead constituency, which includes Remenham, Wargrave, Charvil and Sonning.

Mr Howell, of Benson, who took over the seat from fellow Conservative Boris Johnson following a by-election in 2008, said: “I’m absolutely delighted with the result. It is wonderful to have such an overwhelming expression from my constituents that I’m doing a good job and they are confident I will continue to do so.

“Practically speaking, it would be almost impossible to further increase my share of the vote and while I was campaigning the feedback suggested people would vote for me and the Conservatives.

“I felt reasonably confident on the night of the count but there is always a degree of doubt and of course I would never take the voting public for granted.”

His priorities will include continuing to promote neighbourhood plans, which he introduced as part of the Localism Act in 2011.

The documents, which set out legally binding policies on sites for new housing in a given area, have been adopted in Henley and Harpsden, which produced one jointly, Sonning Common and Woodcote.

Many other towns and villages including Benson, Watlington, Goring and Whitchurch are in the process of writing one.

Mr Howell said: “They share responsibility for planning between the town or parish and the district council and places like Woodcote are seeing huge benefits from that.

“Residents can proactively set out what they want to take and, in Woodcote’s case, have shown they can deliver on that.”

Despite the outcome of the election, Mr Howell said the Prime Minister had made the right decision in calling it and should remain the party leader.

He said: “It was right for her to seek clarity and stability in the run-up to Brexit even if the result did not deliver that. We have to work with what we’ve now got.” When asked his views on her campaigning tactics, he said: “During the run-up to the election, I largely kept my head down and focused on meeting residents and discussing issues in my own constituency. All I would say is that it didn’t come up as a topic with the people I met.

“I think we are fortunate to have Mrs May as a neighbour and it’s very positive that she always uses Henley’s businesses and cafés whenever she comes home. I have always enjoyed working with her and fully expect that to continue.

“It is quite right that she continues as Prime Minister as the Conservatives remain the largest party in Parliament and it is for us to provide the stability that will be required over the coming months.

“People talk about Mrs May contemplating a so-called ‘hard Brexit’ but I dislike that term and believe it is a fiction created by the Liberal Democrats.

“She wants things like a common travel area with Ireland, workers’ rights, reciprocal arrangements for UK and EU citizens and that doesn’t strike me as a ‘hard Brexit’ at all.”

Mr Kavanagh, of Fair Mile, Henley, said: “Firstly, I congratulate Henley on the turnout, 77 per cent is fantastic and reflective of the positive engagement Labour has had throughout this campaign.

“I set out to energise and encourage people to vote for change in this constituency. The result is evidence of new support for Labour in Oxfordshire, both from first-time voters and those who haven’t voted in a while.

“I hope we can build on it for next time. We ran a positive, clean campaign and the results nationally are an endorsement of that strategy. There can be no doubt this election result is a rejection of an extreme Brexit and an austerity experiment that has hit our most vulnerable members of society the hardest.”

Mrs Coyle, of Streatley, said: “We’re very pleased to have increased our vote in Henley and perhaps a little disappointed that we didn’t regain second place, though this reflects a Labour surge nationally. We have fought against a hard Brexit and the national picture is a clear sign that people have rejected that.

“There will be much in-fighting in the Tory ranks and, as a remain supporter, he should put his money where his mouth is for the benefit of the country and the people of Henley.”

Mr Bennett, of Dorchester, said: “I think the Greens in Henley have suffered a bit due to tactical voting. People in Henley are getting very tired of the lack of democratic representation and there was a lot more debate around the major issues this time. There were several candidates’ debates where I think Mr Howell got a tougher time than he expected.”

Mr Gray said: “It was a very interesting campaign and I was happy with my performance as I had expected between 200 and 400 votes, so I was at the upper end of that. It was a pleasure to chat with my fellow candidates on the night of the count and I shall continue to take a keen interest in matters affecting Henley, irrespective of whether I stand again.”

Despite the Conservatives’ success in Henley, Labour managed to seize Caversham from the party’s control.

Matt Rodda, who first contested the Reading East seat in 2015, defeated Conservative incumbent Rob Wilson by 27,093 votes to 23,344, taking a 49 per cent share of the vote.

The Liberal Democrats’ Jenny Woods came third with 3,378 votes while Kizzi Johannessen, for the Greens, attracted 1,093. Both parties had fewer votes than in 2015.

Independent candidate and newcomer Michael Turberville attracted 188 votes while Andy Kirkwood, for the Movement for Active Democracy, came last with 188. UKIP did not contest the seat.

Mr Rodda, 50, a married father-of-two who lives in Caversham, said his priorities were to campaign for more spending on health and education, the provision of more affordable housing and to save Chiltern Edge School in Sonning Common, which is under threat of closure after receiving a critical Ofsted report earlier this year.

He said: “I’m delighted to have won and obviously a little surprised as the previous MP had a sizeable majority, so this represents a significant and substantial swing. I think people are unhappy with health cuts and and concerned about the implications of a hard Brexit.”