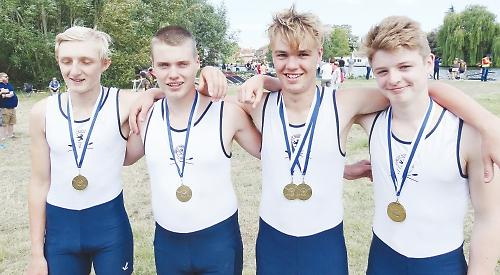 LAST weekend saw a flurry of local regattas, as well as the masters regatta in Nottingham where once again, all sectors of Henley Rowing Club were in action.

Henley’s masters women’s squad were represented by two quads and a single sculler in the British Rowing Masters Championships on Saturday.

Racing conditions were challenging throughout the day with a strong headwind. Janet Mehers raced well in the women’s E single sculls, qualifying for the final and finishing sixth against an impressive field. Both quads in the women’s E event also reached the final taking fourth and fifth places.

On Sunday Mehers was joined by Margaret Hall in a composite women’s F eight crew with Tideway Scullers and Walbrook. In a tough race against another composite, which included ex Olympians and Marlow Rowing Club, they secured gold in a straight final.

At the 175th Reading Amature Regatta Henley’s junior squad were awarded the Radley Cup by the mayor of Reading as the most successful club in the mini regatta for the fourth year in a row. Success came from all age groups. The junior girls came away with two sets of their celebratory medals. The first was won by Phoebe Fletcher, Hanna Hills, Sophia Hahn, Hazel Drury and cox Freya Reid, who despite only being J15 and J16s, eased past older crews from Manchester University and University College London, who they beat in the final by three lengths. The crew of Jess Roberts, Phoebe Snowden, Amy Howard, Amber Weller and cox Chloe Beeton then went on to win their final by four lengths against the home crew from Reading Rowing Club.

The J14 boys triumphed with Cameron Seager winning the single sculls in the final against another Henley sculler, Aiden Drennan. The double of Jack Tait and Ben Acton won their division comfortably against LVS Ascot.

The first two golds were won by Balti Issa, Ollie Taylor, then John Yolland and Joe Sidgwick in divisions A and B of the J16 doubles beating Marlow Rowing Club and Kingston Rowing Club respectively.

This was followed by another two golds in the J15 doubles with Ed Roy and Dan Crick in Division A and James Swinburn with Alex Carr winning Division B. Success continued in the J16 coxless quad event where Henley entered the National Schools J15 champions of James Swinburn, Euan Turnell, Grant Taylor and Alex Carr rowing up an age group to win against Kingston Grammar School in challenging and gusting windy conditions.

It was these conditions that saw the J15 singles event subsequently cancelled but the J16 singles went ahead providing two more gold medals for Henley.