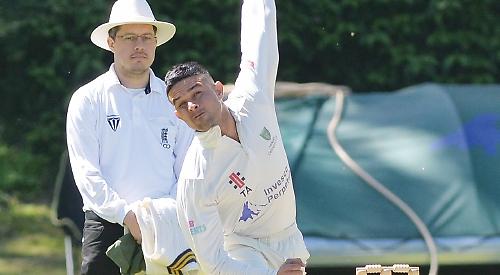 HENLEY carried forward their momentum from last week’s win away at High Wycombe to record a resounding victory over OXFORD, ensuring a strong start to their campaign in the declaration fixtures.

Their successful chase of 89, within just 12 overs and for the loss of only two wickets, means Henley go into week seven top of Division 1 of the Home Counties Premier League.

Despite poor forecasts during the week, the Brakspear Ground was bathed in sunshine last Saturday morning and after having won the toss, Oxford elected to bat first.

Although an understandable decision based upon an almost cloudless sky, with some rain in the week and a little more grass on the wicket than normal, the first session was always going to be challenging. And so it proved, with both Tom Nugent and Tahir Afridi simply too strong for an inexperienced Oxford side. The former struck in his first two overs, removing Eltham for a duck, caught behind by Davison, before being gifted a wicket by Sadiqi in the same manner, who in an attempt to hack a short ball only managed a faint edge behind.

Whilst Afridi built pressure at the Remenham Hill end, Nugent continued to make inroads, with overseas Muhammad Ayub his next victim, playing on to his stumps after making a frenetic 21. From then on however, in conjunction with some tight wicket-to-wicket bowling by Hussain, who followed Nugent from the Pavilion End, it was the Tahir Afridi show.

Rarely does an opening bowler start his spell dangerously, only to become increasingly more threatening as the ball gets older. With the Henley cordon ensuring the ball remained in good condition, Afridi put on a bowling masterclass, taking wickets at frequent intervals. Having accounted for captain Barrett, caught by Morris at mid-off, he proceeded to rip through Oxford’s middle to lower order, clean-bowling Beer and trapping Musk lbw in quick succession, leaving Oxford reeling on 74-7 at lunch. Unfortunately for the visitors, the lunch interval only served to fuel the Henley attack, who proceeded to wrap up the innings in quick time. Having taken the wicket of opener Tong-Jones before lunch, Hussain was replaced by Nugent, who had Fallah caught at deep point, before Afridi finished off the Oxford innings, nicking Humphreys off to Davison and clean bowling Beer, the latter the only Oxford batsman who showed any purposeful resistance.

After having amassed well over 300 in their win against High Wycombe the week before, 89 was never going to be enough for this Henley batting line-up, reaching their target within just 12 overs.

The innings was not without a few casualties however, with skipper Roberts playing on to his stumps for an overdue duck after striking three successive 100s, whilst Hussain was bowled by spinner Humphreys having played some beautiful shots including a maximum over extra cover.

Despite this, the in-form Rowe and evergreen Morris proceeded to make light of the Oxford bowling attack, with Rowe playing particularly aggressively, finding the middle of the bat with staggering regularity. Both batsmen epitomised the manner in which Henley’s top order is able to find boundaries regularly, whilst being able to rotate the strike, nullifying any pressure the Oxford attack attempted to build during the course of the innings.

Although a resounding victory, Henley have sterner challenges lying ahead and captain Roberts is eager to avoid any complacency within the team. Roberts said: “We were very competitive today, right from the outset, however we are also well aware that games like this rarely come along.

“We’ll be working hard this week to ensure we can go and play aggressively and with freedom again next Saturday away at Tring. Each week we look to carry momentum forward, but fundamentally start again to ensure each game is given the same credence and focus as the one before.”