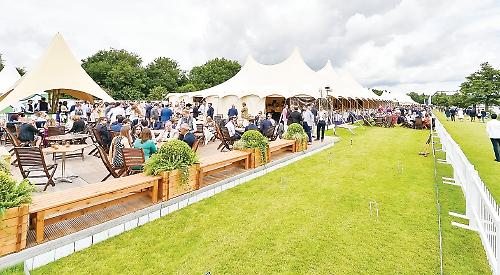 THERE are many things that make Henley Royal Regatta what it is.

There is the world-class rowing, the finery of the spectators’ outfits and the sense of occasion.

And then there is the award-winning hospitality.

Sodexo, an international food services and facilities management company, looks after spectators at the Fawley Meadows hospitality village, off Marlow Road, and on Temple Island.

A team of about 150 front-of-house staff and 35 chefs will cater for more than 6,000 paying guests over the five days of this year’s regatta.

Events manager Alan Webb, 36, and sales and marketing manager Chris Wickham, 37, who have worked for Sodexo for 25 years between them, are supervising this year’s operation.

Mr Webb says: “Our hospitality this year ranges from a buffet for 700 people a day to five-course meals and anything else that anyone might want.

“All the tickets are pre-booked so all our menus are decided before we go on site. We know what needs to be produced and we get the chefs we need to do it.

“Once we decide on the menus we run them past the regatta committee to make sure they are happy with them.”

All the ingredients are sourced as locally as possible with fruit and vegetables coming from Bicester and all the meat and cheese being British.

Mr Wickham says the food is of premium quality “in line with the expectations of the regatta”.

The top-end facility is on Temple Island, which can take just 40 guests and is only accessible by boat.

Mr Wickham explains: “Premium clients come from all over the world and for some we have supplied tango lessons, barbecues and a jazz band on Temple Island.

“We have one client who comes every year and they have a barbecue and then the next day we could have the most formal fine dining.

“We have another client who brings sports cars to have on Fawley Meadows.”

Sodexo staff are on site from about 5.30am every day when around three lorries deliver the raw foods and the chefs start the prep.

Mr Webb said: “Because we are catering for big numbers we have to do a lot of prep.

“The desserts will be plated up and put in the fridge. If we have got 1,500 people on site then that is a lot of dessert to plate up.”

At about 10.30am, the chefs start prepping the main course. The starters will be plated up at about 11.30am before the staff get ready for the lunchtime service.

Mr Webb says: “The principal chef will come up with all the menus and is on site to brief everybody to make sure they know what they are doing and will run the pass.”

Bookings can be for parties of up to 100 people, each one paying from about £250 for a ticket, which includes a complimentary bar. Last year, guests drank 2,350 bottles of champagne and more than 3,700 bottles of wine.

Sodexo, a French company, was awarded the five-year hospitality contract by the regatta in 2013.

One of the reasons it was chosen was for the different price points, packages and experiences it offered to meet the needs of the diverse range of people who visit the regatta.

Last year, the company won event caterer of the year for its partnership with the regatta at the inaugural Sports and Leisure Catering Awards.

This year, as well as providing food, it has constructed a giant bamboo marquee where its guests enjoy themselves.

Mr Webb says: “It looks like a cathedral and takes five days and 600 man hours to build. It has 2,600sqm of dining space, 530sqm of kitchen and prep space and it takes up 200m of river frontage.

“Everything in it is specially chosen, from the linen to the 230 table centres with flowers. The centres have to last five days, so they are refreshed on a Friday evening.

“We go through the customer journey ourselves to make sure everything runs as smoothly as possible.

“A lot of people think we turn up a couple of hours before but it is a lengthy process to make sure everything is right for a week-long event.”

For the regatta, almost three-quarters of the staff are recruited from within 30 miles of Henley, a quarter arrive via agencies in Reading and the rest come from London, where the Sodexo head office is — its hospitality arm is in Ascot.

The Sodexo Group was founded in 1966 by Pierre Bellon and operates in 80 countries with 420,000 employees, serving an average of 75 million consumers every day.

The company delivers a range of other services including cleaning, asset management, security, laboratory and ground maintenance services. It has an annual turnover of more than £1billion.

In the UK, the company has catering and hospitality contracts for not only Henley but also Chelsea Flower Show, Royal Ascot, Burghley Horse Trials and the Open Golf Championship.

Mr Webb, who began as a waiter, has been with the company for 15 years and is working at the royal regatta for the fourth time.

He says he enjoys the sense of achievement when it’s all over.

“At Henley we are building it up from nothing and seeing it all the way through until the last guest leaves on the last day,” he says. “What I enjoy is seeing the whole thing.

“I think Henley royal is one of the British sporting events, it is quintessential.”

Mr Wickham, from Cox Green, has a degree in graphic design but joined the company as a sales account manager in 2007.

He says: “In my 10 years with Sodexo I have got to know what the premium events are and Henley is up there with Ascot and Wimbledon.

“It is the premium rowing event in the world. It is the rowing race that all rowers want to win and it is so special.”