George holds his nerve to help Cougars to derby win 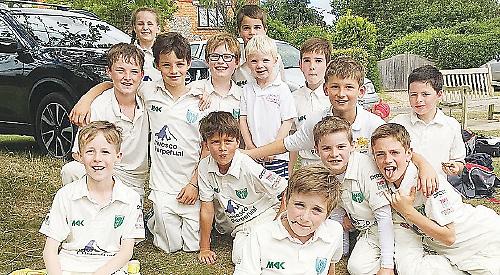 HENLEY COUGARS U11s ran out winners in their home Division 1 match with READING U11s at Harpsden.

Reading batted first and hit 117-3 with Arthur Unwin and Sam Cooper picking up wickets while Frankie George was influential in a run out.

In reply Sam Cooper and Ted Carter got Henley off to a good start hitting 16 and 8 respectively. Arthur Unwin then came in and held the innings together with 20 before Harry Martin upped the run rate just when it was required hitting 15. With two overs to go Frankie George saved the day with some good batting as Henley reached 118-4 with three balls remaining.

HENLEY LIONS U9s defeated KIDMORE END U9s in a match that was decided in the last over.

The Lions bowled and fielded with wickets falling with a broad distribution across the team to Oscar Farr (two), Freddie Corbett (two), Josh Grocock, Harry Pickford and Max Sheriff (two in one over). Captain Tommy Lane delivered his first maiden over in a competitive match as Kidmore End put on 238-8.

In reply batting was solid by the Lions with Freddie Corbett, Max Sheriff and Tommy Lane all hitting boundaries.

The scores were tied going into the final over with Tommy Lane and Oscar Farr in. Lane then hit a four and then a bye as Henley won by seven runs on 245-7.

In their first year playing U11 Division 1 cricket in the Oxfordshire League the HENLEY LIONS U11s, which is mainly made up from year five boys, finished runners up in their group winning four out of six matches.

In the Berkshire League HENLEY LYNX U11s defeated KIDMORE END U11s. Henley captain Oliver Saunders won the toss and elected to field. Some good bowling and fielding from the Lynx kept the pressure on the visitors as they struggled to score and closed on 288-3. In reply, despite losing a wicket to the first ball, Henley recovered well with some good hitting to finish on 320-6. Will Corbett, Harry Wildgoose Charlie Hunt, Oliver Saunders, Conor Quinn, Oscar Thomas all hit fours with guest Freddie Corbett hitting three boundaries and Ben Horner five including three in one over.

Despite only fielding nine players, HURLEY U15s ran out 28 run winners in their clash with SONNING U15s on Wednesday of last week. Hurley were put into bat but soon lost Calliss (2), caught driving in the covers. Dawkins and Hill made use of a fast outfield to steadily increase the run rate.

Dawkins dominated the partnership of 65, with some controlled drives and calculated running, offering just one chance as he accelerated to a well earned 50 not out. Hill (40 not out) grew in confidence throughout his innings, and despite the loss of Skelton (4), with an ill advised pull of a ball that failed to get up, and Patrick (0) caught in two minds.

Bussell manoeuvred the ball around the field with ease, demolishing the supporting bowlers for 40 not out in addition to Hill hitting two sixes in the last over, to help Hurley reach 152-3.

Hurley had to play their cards correctly, with depleted numbers in the field. Patrick (3-14) accounted for the opener, Howell the supporting act with a sharp catch to his left. Dawkins (1-22) got himself on the board early, and also gobbled a catch off Patrick.

Captain Hill, wisely rotated his ranks to let Henry and Noah Drew gain some experience that will bode well for the future, sharing six overs between them.