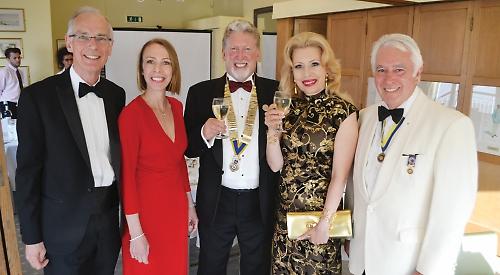 FORMER Mayor of Henley Julian Brookes gave a talk about his career in the Royal Navy at the club president’s annual dinner.

Lionel Scott welcomed 30 guests to Leander Club for a two-course meal of baked cod wrapped in bacon followed by lemon posset with fruit.

Councillor Brookes, whose year of office ended in May but is still a town councillor, is a former engineering officer who served on submarines.

Mr Scott, who lives in the Fair Mile with his wife Iveta, said: “It went very well. Everybody was very convivial and Leander is a great venue for the event.

“I am interested in things naval and I was the one that actually asked Julian to be the speaker.

“It was very interesting and gave us an insight into naval life. The people they employ on these submarines are the cream of the fleet.

“Several of the other Rotarians came up to me afterwards and said they thought it was interesting and that they learnt something.”

Mr Scott said he had enjoyed his year as president before handing over the chain of office to his successor Maria Bunina.

He said: “We’ve had a successful year in the sense that we have got some new members and everybody seems to be enjoying it.

“It’s quite taxing in that you have to be there a lot of the time and be involved but we have managed to raise quite a lot of money for charity this year at various events.”

On Tuesday last week, Mr Scott chaired his last full meeting as president of the club at the Red Lion Hotel.

Andy Jones, of the Henley office, explained that this operation was one-quarter of the Oxfordshire South and Vale Citizens Advice.

This is one of 300 local members of the National Association of Citizens Advice Bureaux and is an independent charity responsible for its own funding.

In addition to the manager, the Henley office has six to eight volunteers present during opening hours with varying areas of expertise. In a survey of the clients, the service received very high satisfaction.

Mr Jones explained that they provide free, confidential and impartial advice to everyone in the community on the problems they face and, as a result of their conversations with clients, research and campaign to improve policies which affect people’s lives.

As to the particular challenges facing the Henley operation, Mr Jones said there was a ready supply of suitable volunteers and support from Henley Town Council, which provides the building.

However, there was a perception that there is no need in Henley and that the building is old and in need of maintenance.

As a result of funding from South Oxfordshire District Council being reduced, Citizens Advice was always seeking new local partnerships and had received support from various organisations, such as Rotary and the Lions.

After Mr Jones’s talk, Rotarian Jim McWhirter, a member of the Reading Matins club as well as a trustee of the Friends of the Henley CAB, suggested that one of the most significant improvements which could be made to the building was in the reception area, which was so unwelcoming.

He suggested that Henley Rotary Club could raise funds for this and other improvements.

As a result, it should be eligible for a grant of up to £1,500 from Rotary District 1090 as a consequence of the club’s $100 per member per annum contribution to the Rotary Foundation, the international charity.

He offered to assist the club in making the arrangements.

In thanking Mr Jones and Rotarian McWhirter, David commented that “Jim is one of the good eggs of Rotary”.