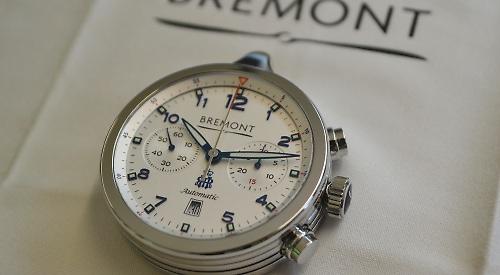 The Henley company has created a handheld mechanical stopwatch for the umpires to time the races and an official regatta wristwatch.

The regatta is one of the few sporting events that still times races mechanically rather than digitally.

It has agreed a five-year deal with Bremont to be its official timing partner, the first such deal in the regatta’s 178-year history. It has agreed similar deals with clothes retailer Hackett and car maker Aston Martin.

Bremont, which was founded 15 years ago by brothers Nick and Giles English, has produced the watches at its base off Marlow Road after spending about two years on the project.

Nick English said he and his brother had discussed the idea of a partnership with regatta chairman Sir Steve Redgrave and his friend and old rowing partner Sir Matthew Pinsent, who is a regatta steward.

“We’ve known these guys for a long, long time,” he said. “We’re in that sort of world.

“We had been chatting to them for a while and said that it would be really lovely to get involved somehow.

“They said, ‘we love the fact you’re British and local’ — you couldn’t get a better synergy in that respect.

“It’s a complete unknown for them because they have never used a commercial partner and it’s an unknown for us because we’ve never worked with them but we both have the same level of enthusiasm.

“For Giles and me it has got be fun and these guys are fun and they get what we’re about, which is nice. We have that respect.”

Mr English, 46, from Bix, says it is an honour to partner with such a famous and prestigious event.

He said: “The regatta is the pinnacle of rowing pretty much, that and the Olympics. People often get more excited about winning at Henley than they do about anything else.

“My son rows for Henley Rowing Club and he’s got very much into it — it’s our local sport, isn’t it?”

“We have been to the regatta so many times over the years and to be involved in this way is wonderful.”

The Bremont stopwatch features a white dial with blue hands and numbers. It also has the regatta logo in blue on the face and an open back so the movement can be seen. It sits in a 43mm case.

The company has so far produced only a handful for the regatta officials, each one inscribed with “HRR/17” on the back, as well as the issue number, but may manufacture more in the future.

Mr English said the design of the stopwatch had to capture the quintessential values and traditions of the regatta.

He said: “While we’re not a brand that necessarily associates itself with sport the whole time, we’re certainly associated with testing, endurance and timing which fit in so well with the regatta.”

The wristwatch has a 40mm case and blue dial and also bears the regatta logo. A limited number has been produced. Mr English said: “It’s a classic-looking timepiece with an open back, which we can make bespoke for the competitors. What’s nice is it will also be available to those attending the regatta as well. It’s a lovely souvenir to take home.

“Hopefully it’ll appeal to all, whether you’re a 20-year-old rower or you’re coming back and you’re 82.

“It’s supposed to be a fairly timeless design. You’re not going to design a big diving watch but at the same time people would like something slightly different.

“We wanted to design something that was quintessentially British, quite classic and quite Henley regatta.”

Like all the Bremont watches, both the stopwatch and wristwatch were designed by the brothers personally.

“If you design by committee everyone has their own ideas and then you end up with a watch nobody likes,” said Mr English.

“We have got many years of experience in what we feel will work for that demographic.

“Giles and I work with a graphic designer and a product designer and we say, ‘this is what we love, what we want to achieve’.

“You go backwards and forwards. If you try to do something quite avant garde it’s going to be hard to build so you go back to the drawing board.”

Once a watch design has been finalised, Bremont acquires the parts needed to create a prototype.

Mr English said: “They’ll be designed in-house and we will then decide which parts we’ll make and which to outsource. Some of the movement parts may come from Switzerland.”

All the watches are assembled in a quarantined, dust-free environment at Sawmills, the company’s design-award winning base, which is only about 200 metres from Temple Island and the regatta start line.

The prototype will then be tested to ensure all the parts fit together perfectly and function properly.

“You can’t time the regatta with something that doesn’t work,” said Mr English. “They have to go through rigorous quality control, so we start testing those movements over a period of days. People are bashing it and getting it wet and it’s still expected to tell the time.

“I don’t know many industries as complex as this because you’re designing something which has got to look good and has to work.

“A watch is about performance and it’s a piece of jewellery — some of these watches cost the same amount as a small car.

“When we design the watches it’s beautiful engineering. You’re producing something that has a couple of hundred parts.

“We have an engineering background and we’re passionate about how things work.

“The aims of Bremont are not that different from regatta. We’re about endurance and the models we’re designing are tested and put through their paces just like those athletes. It’s about precision and timing.”

Mr English said Bremont was also a retailer, wholesaler and marketing company and that Sir Steve and Sir Matthew were “completely the right people” to develop a commerical partnership with without compromising the regatta’s history and quintessential Englishness.

“We’re the first ever commerical partner in the regatta’s history,” he said. “It’s not about putting massive great sponsorship posters everywhere. They wanted to do it the right way, which they are doing.

“We’re dipping our toe in the water this year. We’ll get to the end of the season and we’ll have a bit more time next year.”

Sir Steve said: “I have known both Nick and Giles for a number of years and have followed their success story closely.

“Being a leading luxury watch brand and located in Henley, it is fantastic to have them on board as official timekeepers for Henley Royal Regatta.

“We have been working closely on the event clocks and hand-held mechanical stopwatches for the race umpires and are very excited about them.”