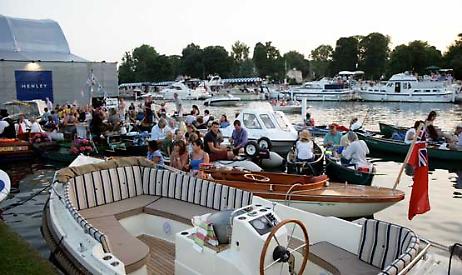 HENLEY Festival has brought back an enclosure for small boats at this year’s event.

The area was scrapped for last year’s festival after safety concerns were raised by the Environment Agency due the increasing popularity of the five-day event.

The festival also introduced new river and mooring conditions due to the “severe crowding” on the River Thames the previous year.

This upset some small boat owners, who said they would be unable to moor as normal as the agency insisted that only boat owners who had paid a mooring fee should be allowed into the enclosed festival mooring area.

For this year’s festival, which begins on Wednesday, an area will be created downstream of the “floating” stage.

Chief executive Charlotte Geeves told the Henley Standard that she wanted to make the festival as accessible as possible.

She said: “We have created an area for unpowered craft and boats with inboard engines, boats that can bring their engines out of the water and those 20ft and under. They will be able to congregate in the area, which will be between the booms and the Berkshire bank. It won’t go into the navigation channel.

“What we would like to see is a donation to the Children’s Society, our charitable partner. We have said a suggested donation of £20 but it can be less, it can more. It’s not enforceable.”

The enclosure will be separate to the area where boat owners who wish to moor to the Berkshire bank pay a fee, which must be paid with the purchase of tickets.

Ms Geeves said: “The festival has become more and more popular in recent years and in 2015 we had a small boats area where the boats were pushed into the navigation channel.

“The Environment Agency was really worried about safety and in 2016 this area was removed for safety reasons.

“We’re going to try this to see if it works and what we would really appreciate is some constructive feedback after the festival from boat owners. If it doesn’t, for whatever reasons, we’ll improve it for next year.

“We want the small boats at the festival but the most important thing for us is they are safe. We don’t want an accident on the river.”

Last year the festival said that boat users who had not purchased a mooring had to continue travelling up and down the river on the navigation channel. Dropping anchor was not permitted and the agency would move boats on.

Boat owner Dr Lisa Silver, of St Andrew’s Road, Henley, said: “The only question I have is where the enclosure is. If it’s a long way down there’s probably not much point hanging around there but if it’s closer I don’t mind paying £20 to the charity.

“The small boats are part of the festival. They make it look really fantastic and I think they bring a lot of atmosphere.

“The small boats are largely people from Henley. It makes the whole thing seem that much more for the community.

“I think the change is welcome and we can just see how it goes.”