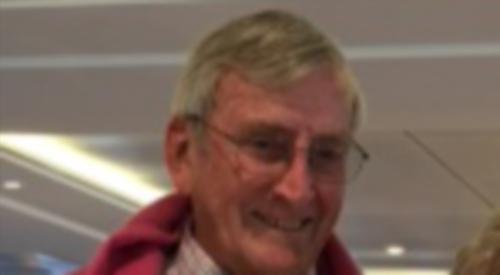 JULIAN Philip Allison, known generally as Philip, or Phil, died peacefully at the Sue Ryder hospice in Nettlebed on June 18, surrounded by his family and supported by the excellent Sue Ryder medical team. He was 82.

Born in 1935 to Charles Ralph and Winifred Rita Allison, Philip had three siblings, Jane (Janey) who lives in Cheshire, Simon (Simmy) who died in 2013 and Judith who died as an infant.

Philip’s childhood was very much shaped by his father’s position as a headmaster of Brentwood School from 1945 to 1965.  Initially he attended Brentwood School but was then moved to Felsted and completed his education studying architecture at Northern Polytechnic.

Philip inherited his father’s love for teaching, being drawn early in his career into teaching architecture at what is now Oxford Brookes University, where he enjoyed a successful and happy career.  This included initiating and leading the computer-aided design course, having quickly recognised the value of computers.  As a practising architect his gift to his family was to design and build their modernist, much-loved family home, Carpenter’s House in Stoke Row.

Philip married Caroline Wood in 1962 having three children, Lulu, Thea and Joe. He was an active and loving father. Very physically fit, as well as rescuing children from trees and pulling dinghies full of children in the sea, Philip also enjoyed playing squash, sailing, diving, playing cricket and rugby and climbing.

A further legacy to his family was a cottage in Wales, which Philip’s parents bought after a particularly wet camping trip in the area. It has been the scene of wonderful family holidays and celebrations ever since. Philip was a diligent custodian of the cottage, and loved to be there with family and friends for large family parties and celebrations. It is perhaps one of the places his absence will be most felt.

Philip loved his time teaching architecture at Brookes. Always keen to encourage young minds to develop and form, and loving socialising it was the perfect career for him. His children and even young friends of theirs still remember how he encouraged them to have confidence in their own opinions and to develop critical thinking in relationship to their burgeoning enthusiasms and choices. Philip was a true educator.

When his marriage to Cally ended, Philip moved to Headington in Oxford where he lived in bachelor style, part of a wide and social group of friends. He poured his energy and natural liberal convictions into a political career with the Lib Dems, eventually becoming a local councillor in the area. He remained a supporter of the party up to his death.

Philip met Nansi Diamond in 2002 introduced to her by life-long friends Lindsay and David Chesterton. Nansi and Philip’s relationship developed quickly, and he moved to Henley to be with her in 2003.

Philip and Nansi were a great team. Their social life was extraordinarily rich and busy, with regular holidays abroad and trips along the Thames in their boat. Some holidays centred around Philip’s love of diving, which he continued to enjoy into his seventies. At this time he also re-joined Henley Rugby Club, having played there initially some 50 years before and became a loyal supporter.

In his last years Philip got great pleasure from singing with Henley Choral Society, where he was as reliable in his attendance of post-rehearsal pub sessions, as the rehearsals themselves. He recently became a member of the croquet team at Phyllis Court Club taking up the game with great enthusiasm and success.

Described as an “exceptional and big-hearted man”, Philip was naturally sociable, he loved to host and participate in parties and gatherings. His signature party outfit of red patent shoes and bright bow ties signalled his intention to enjoy life and its celebrations.

He was a true gentleman, as tributes to him testify. Described by Nansi’s daughter Carolyn as “warm and wise, stylish and colourful and always informative and entertaining company” Philip had no difficulty extending the love and connection he had with his existing family to include his new family with Nansi.

Philip will be greatly missed by his partner Nansi, his three children, numerous grandchildren and step-grandchildren, all his family and many, many friends.

Philip’s funeral will take place at Reading Crematorium on Thursday, July 6 at 1.45pm. Philip’s party style of bow tie and patent shoes will be honoured and guests are invited to leave their mourning clothes at home and wear a bow tie.