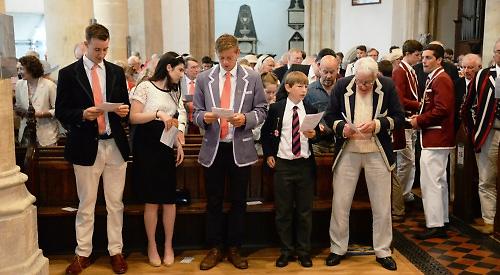 The service was conducted by Rev Canon Martyn Griffiths, rector of Henley with Remenham, for the 13th and final time as he retires in January.

Rowing commentator Robert Treharne Jones, who is press officer at Leander Club, was also present as he is a member of the church choir.

The congregation sang three hymns and Sir Steve gave a reading from the book of John.

Athletes from the Tabor Academy in Massachusetts took the retiring collection. Rev Griffiths said: “It doesn’t seem too long ago that I was a regatta virgin and relishing the fact that, for the entire week, I would never have to feel under-dressed.

“I would simply like to say thank-you for the opportunity to serve this regatta for the past 13 years.”