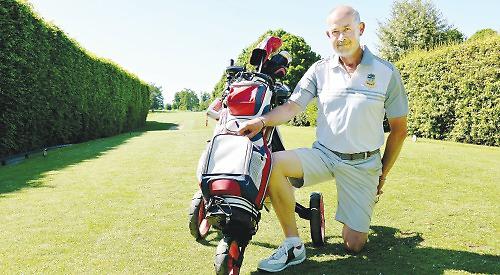 GOLFER Dave Haddock is recovering after playing 101 holes on the hottest day of the year so far.

As the Diary reported last month, Dave was raising money for a Henley charity.

The 15 hour-plus challenge took place on June 21 — the longest day of the year — at Badgemore Park Golf Club in Henley, where he is captain.

It was dubbed “Captain Haddock’s Longest Day” in a reference to the character from The Adventures of Tintin.

Dave, 59, teed off at 4am with Jamie Palmer from the club’s pro shop and says he felt confident, although it was difficult to see his ball at that time of the day.

As the light improved so the temperature rose, reaching around 33C at its hottest during the day.

“With 63 holes played by lunchtime, things were going well,” he says. “The green staff were following me round the course with the remote control for the sprinkler systems just in case a cooling shower was needed. The lunchtime break and protein were much needed, as was a shower, change of clothes and
liberal spreading of factor 50 sun
protection.”

Dave says that during the first 72 holes his golf was of a good standard and he was almost playing to his handicap of six but things started to go downhill in mid-afternoon.

“Then it was a matter of don’t worry about the score, let’s just see if we can keep going,” he says. “It was very hot out there but, after being supported by many members and force-fed with water, time was called at 7.45pm.”

Dave, an account manager in the gas industry who lives in Ewelme, was
raising money for the Chiltern Centre for disabled children, off Greys Road, which is his chosen charity for his year as captain.

Dave says: “It was a very long and very hot day but it was for a worthwhile cause.

“Badgemore’s members, friends and family are all very generous.

“I was still walking at the end, although I started to stiffen up later. I might have better trying it the following day when it was 20C with light cloud and a cooling breeze, which would have been perfect.”

For golfing readers, he hit 499 shots during the day and made seven birdies.