Men are gunning for apes (and vice versa) 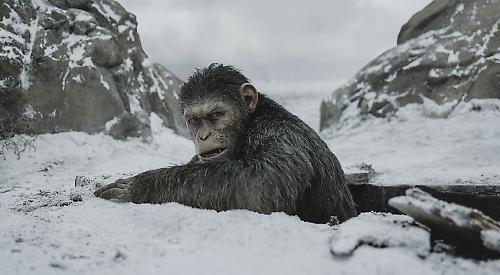 IT’S man versus ape in the final battle to determine the fate of the entire world.

The most recent reboot, beginning with Rupert Wyatt’s Rise of the Planet of the Apes, shifted the dynamic from the previous films. Moving away from space travel themes, it has chosen to focus on creating a portrait of a dystopian future with a satirical edge.

After a botched assassination by the humans in the second film, hyper-intelligent Caesar, played by Andy Serkis — best known for his “performance capture” portrayal of hobbit-gone-bad Gollum in The Lord of the Rings — seeks to lead his simian brethren to victory.

His troops are under a new threat from humanity, which will lead to a head-to-head battle for domination over the Earth.

Leading the humans is the ruthless Colonel (Woody Harrelson), believing he is humanity’s last hope.

With the stakes being so high as a result of the success of the previous films, it would have been easy for Reeves to sit back and produce a special effects-laden film containing nothing but warfare.

But look a little deeper and while this is being released at the height of the summer blockbuster season, this is a film that is asking big questions about survival and the fleetingness of human existence.

Reeves, acclaimed for his directorial work on the award-winning Cloverfield, also directed Dawn of the Planet of the Apes, therefore providing continuity and, hopefully, a safe pair of hands.

With the promise of a gripping storyline, big-budget action sequences and solid pedigree, there should be no shortage of fans, young and old, willing to part with their hard-earned at the big screen this weekend.

War for the Planet of the Apes is now showing at Henley’s Regal Picturehouse cinema.