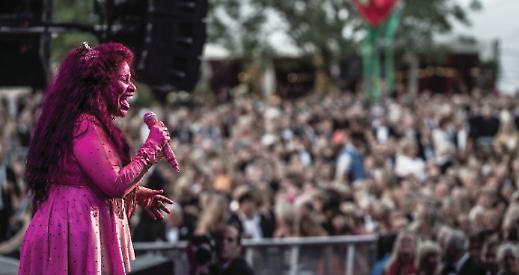 THE chief executive of the Henley Festival has hailed the 35th event a success despite two of the nights being marred by walkouts.

Audiences members were seen leaving the lawn and grandstand areas during performances by Chaka Khan on Friday night and Goldie on Saturday night.

Some took to social media to express their anger, branding Khan’s performance “dreadful” and Goldie’s “awful”.

Charlotte Geeves, who has run the festival since 2015, admitted Khan’s set was “disappointing” but praised her performance, as well as Goldie’s, after he performed his 1995 album Timeless with the Heritage Orchestra on the “floating” stage.

She told the Henley Standard: “Obviously at the end of the night at Chaka Khan we had been aware of the disappointment coming from the audience. We were aware people had left the grandstand and lawn as they were disappointed. Contractually, we’re not allowed to stipulate what songs they play. Because it costs us money to bring these artists in, we want to ensure the best performance we can possibly get.

“I think it was unfortunate that we didn’t get the greatest set we were expecting and we will deal with that internally. As a festival audience they are not necessarily purist Chaka Khan fans, so what our audiences expected and what we expected is all of those songs they know and love.”

Ms Geeves says that for some visitors Goldie wasn’t for them. “We were very clear in our communication of what it was,” she said. “We did experience some people leaving during the set but I don’t think we mis-sold that show. We made very clear what the show was. People decided they wanted to try it and then decided it wasn’t for them.

“If people take a punt on that evening and bought tickets and decide that they want to leave, I think that’s fair enough. From a performance perspective, that performance was excellent. At no point were we disappointed with the performance.”

Ms Geeves believes the festival is always trying to reach new audiences. She said: “We believe we should be trying new things, bringing new audiences to the festival and challenging audiences and I believe Goldie did all of those things. The 2,500 people watching that show loved it.

“This is not necessarily a path we’re going to go down every year but I do feel we should be pushing the boundaries of the festival and do different things. But I fully understand it’s not going to be everyone’s cup of tea. We don’t expect the audience to love everything, we hope that they do. I believe we put on a quality festival with a huge amount of variety and excellent performances across the whole week.”

About 26,500 people visited the festival site over the five days dressed in dinner suits and ballgowns as temperatures reached 30C.

The Pet Shop Boys, who played on Thursday night, was sold out and Jess Glynne’s performance on Wednesday’s opening night and Friday, when Khan played, were close to capacity.

Glynne launched the festival by taking to the stage in a pair of silver flared trousers, a shiny purple jacket and giant sparkly glasses and had the audience dancing from her first song, Right Here.

The thousands of people in the crowd sang along during the set which featured some of her known hits, including Real Love and her first number one, Hold My Hand, and finished with her 2015 number one Don’t Be So Hard On Yourself before departing to screams from the crowd.

The following night the Pet Shop Boys had the whole crowd dancing as they performed a string of hits on the second night of the festival. They were revealed to the packed lawn and grandstand as two large white discs on the stage rotated to reveal the synthpop duo behind.

Neil Tennant and Chris Lowe, wearing futuristic metallic helmets and sunglasses, then launched into a 90-minute set, dazzling the crowd with a light and laser show. It included The Pop Kids, Go West, It’s a Sin, and finished with an encore of Domino Dancing and Always on My Mind.

Dressed in shiny black trousers, a black jacket, polka dot tie and white shirt, Tennant told the crowd: “For once I don’t feel overdressed! Tonight, I know you’re in your tuxedos and gowns, but we’re going to have some fun, we’re going to dance, you’re going to be blinded by lasers because, tonight, you’re all pop kids.”

Khan saved the best until last on Friday. The soul star, known to fans as the “queen of funk”, closed her 90-minute set on Friday with her two biggest hits – I’m Every Woman and Ain’t Nobody. The crowd were on their feet and dancing as she shook hands with admirers in the front row while hundreds of people were taking photos and videos on their mobile phones.

Khan, who was accompanied by a five-piece band and three backing singers, opened her set wearing a sparkling top and skirt with ripped blue jeans and matching sparkling boots.

Her two guitarists took turns at playing loud, elaborate rock solos throughout the show, with one playing the instrument behind his head and later with his teeth in the style of Jimi Hendrix.

It took a few songs for the audience to fully warm up but they were dancing energetically by the time she reached her fourth song I’m A Woman, which she first recorded in 1975.

Halfway through the set, she disappeared for about 10 minutes to change into an all-blue sparkling outfit, during which time her band performed a jazz instrumental.

Before launching into I’m Every Woman, she told the crowd: “This song needs no introduction. It doesn’t matter if you’re a man or a woman — just sing along with me and enjoy it.”

Arriving in a Volvo on Saturday, Goldie shook hands and fist bumped into the backstage area, wearing his signature faded jeans, gold chains and a black T-shirt.

Then, donning a baseball cap as he moved out on to the stage, he launched straight into the music and people were on their feet swaying and jumping to the beats. His set was accompanied by a light show and smoke, with the highlight a haunting rendition of Timeless, which left the crowd shouting for more, but he had run out of stage time.

All Saints and Mel C took the crowd back to the Nineties on the closing night. The girl band and former Spice Girl combined for a rendition of Pure Shores, All Saints’ 1999 number one, to finish the show. Throughout both sets the crowds sang along and jumped around.

The group, who all wore black and white during their hour long set, played a number of their hits including Never Ever, Lady Marmalade and Black Coffee.

Nicole Appleton, who had a house in Henley until 2014, told the crowd: “Thanks for having us, I used to live in Henley and I absolutely love it here. You guys are lucky to have this festival and we are honoured to be here. I could do this all night.”

Her sister Natalie Appleton, Melanie Blatt and Shaznay Lewis all took turns to speak to the crowd between songs.

Blatt said: “You all look so glamorous tonight. This is such a beautiful event and we love watching the boats going by. Please sing along whenever you can, we appreciate the help!”

Mel C, who wore a black velvet dress, strutted on to the stage to open the final night on the “floating stage”. She said: “Tonight is like going back to the Nineties, when things were a bit simpler. There is going to be a bit of girl power tonight.”

The singer, whose full name is Melanie Chisholm, performed hits such as Never Be The Same Again and When You’re Gone. She also dedicated a rendition of her second single Northern Star to her daughter Scarlett.

Mel C also brought a group of girls from the crowd on to the stage to dance while she performed Say You’ll Be There, a number one for the Spice Girls in 1996. As she introduced them she said: “This song is usually sung by five people, one of them is ginger and one of them is scary.”

Other artists at the festival included the King of Soul, Geno Washington and the Ram Jam Band and Grammy award-winning singer Vonda Shepard, while the comedy line-up was the biggest to date and included Sara Pascoe, Russell Kane and Andy Parsons.