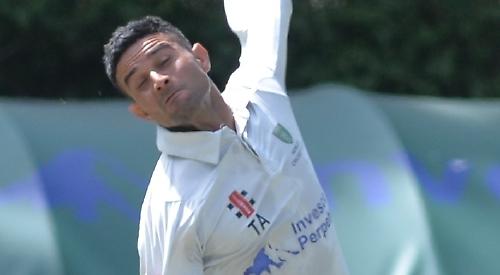 HENLEY emerged winners at a canter at home to GREAT AND LITTLE TEW to maintain their lead at the top of Division 1 of the Home Counties Premier League in a game which served to emphasise that much sterner challenges lie ahead.

Winning the toss, the Tews elected to bat on what was and became evermore a batsman’s paradise of a wicket. Some early exuberance from opener and Tew skipper Harry Smith in serially dispatching Tom Nugent to the boundary was tempered by the dismissal of fellow opener White by Tahir Afridi in his first over. Smith soon followed as Afridi removed his middle stump. This brought Lloyd Brock to the crease to join Garrett.

Both batsmen adopted the view that preserving their wickets took precedence over run making as the pair ground out a 50 run partnership off three times as many balls. By the time Garrett departed for 47 off 90 balls, Afridi’s third victim of the day, 34 overs had passed with just 83 runs to show for it. By the same token Afridi and Nugent ran in hard all morning in hot conditions and never made it easy for the Tews’ batsmen. All the Henley bowling was well executed and afforded little scope for exploiting the bad ball.

The arrival at the crease of Woodward upped the tempo, but following the departure of Brock for 40 off 120 balls with the score on 135 and 17 overs remaining, the scope for posting a competitive total was limited and Woodward was to derive little assistance from the middle and lower order, as Harry Jordan removed first Brock and then the Tews’ South African overseas Jancan Adams and the spin of Gurveer Singh sorted out the lower order, thanks in no small measure to some stunning catches by Nugent in the deep.

The Henley response demonstrated what a good batting deck it was. Shrugging off the early loss of David Barnes who had started positively, Henley skipper Michael Roberts and Waqas Hussain set about the Tew bowling.

Hussain, a clean hitting and at times vicious striker of a ball, took the lead and brought up his first and a very stylish century for Henley since joining them this year. His innings was mightily impressive, showing what an asset he is for Henley and Berkshire, and could well be for a professional outfit in due course.

Roberts played the anchoring role, happy to rotate the strike with the occasional boundary, perhaps more interested in watching his batting partner’s stroke play from the other end. Hussain was not to see out the innings and that task fell to Euan Woods whose unbeaten dozen included a hook shot that had to be retrieved from the lower reaches of Matson Drive. Woods and Roberts guided the innings home, with the latter finishing 79 not out.

In the end a convincing win over a side that may struggle to avoid relegation this year but with Finchampstead, Horspath and High Wycombe all winning, there is no scope for slip-ups and every victory and every point gained is vital in what is presently a pretty open contest.

Speaking after the the match Henley skipper Roberts said: “We are playing some really good cricket at the moment but more importantly, the competitive fire is burning brightly and we’re loving the contests. Our energy and attitude have continued to facilitate our performances, but we are aware that tougher challenges lie ahead.”