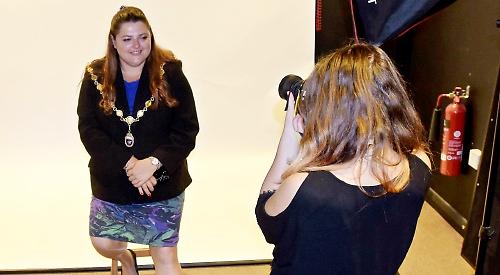 A TEENAGE photographer has produced an official portrait of the Mayor of Henley.

Maja Ochocinska, who is studying the subject as part of her A-levels at The Henley College, photographed Councillor Kellie Hinton and three of her fellow town councillors for use on the authority’s website and social media.

Maja, who is 17 and lives in The Close, Woodcote, took up the discipline as a hobby about two years ago, when she was a pupil at the village’s Langtree School.

She would initially snap pictures of the surrounding countryside on her smartphone but later started using her mother Zuzanna’s Minolta film camera and lenses.

She then started taking landscape photos when she was on holiday and close-up images of flowers and insects before moving on to portraits of family and friends.

When she began studying at the college in September last year, she learned to use a Nikon digital SLR as well as studio flash lamps, which are linked to the camera by remote control. Her photoshoot was arranged by the Mayor, who is looking to strengthen links between the college and the council. Teachers offered Maja the chance to take part and she accepted.

Maja, who is also studying geography and religious studies, said: “It was a really amazing experience because I wasn’t shooting somebody I knew and had to take it seriously.

“It was more of a ‘real-world’ situation and I knew if they liked it, they wouldn’t just be saying it to be nice. I was quite nervous at first but I soon got into it and the atmosphere very quickly eased up.

“I just tried shooting them from various viewpoints and distances until we had a good choice of shots. The Mayor seemed pleased with hers, which made me happy.

“All of the councillors were very co-operative and easy to work with, which made things a lot more straightforward for me. It’s still quite tricky for me to use all the kit but I’m getting used to it.

“I’m really proud to know the results are going to be used in public. It helped learning to shoot on film first because you have to be more careful — you can’t see what the photos look like immediately afterwards.”

Maja has not yet decided whether to go to university but would like to pursue photography as a profession.

She said: “You never know what might happen in future but I’d love to travel and do more documentary shots in other countries, though I might start out by doing studio-based portraits.”

Councillor Hinton said: “Maja was brilliant and made me feel really comfortable. I felt able to have a laugh and be myself.

“Anyone who knows me knows I like to have a laugh and be as approachable as possible and that’s what she captured.

“Her image will help our website look more professional and can also be used on noticeboards and social media. Organisations like South Oxfordshire District Council sometimes request a photograph of me and I can send the one Maja took.”

She added: “My year as Mayor is very much about young people. The college is already a big part of the community but I would like to see the two integrated more.

“There may be other projects that the students can get involved with that could save the council time and money. We may be able to feed some of those savings back into the college so that both sides benefit.”

Councillor Arlett added: “It was good of the college to offer their services and the images turned out well. I think they took about 20 of each of us and we chose the ones we liked the most. They’re obviously very professional in what they do and they said they thought I was quite photogenic, which came as a surprise! In principle the idea of working more closely with the college is a good one but we need to have further discussion to decide what is appropriate.”

Maja’s teacher George Bull said: “Maja did really well. She was in control of the session all of the time, which is crucial for someone working in studio-based photography.

“An opportunity like this allows our students to gain an insight into the professional world. It helps them gain confidence photographing different types of people. She dealt with the councillors in a mature and professional way for a 17-year-old.”