Record numbers of swimmers take over regatta course for challenge 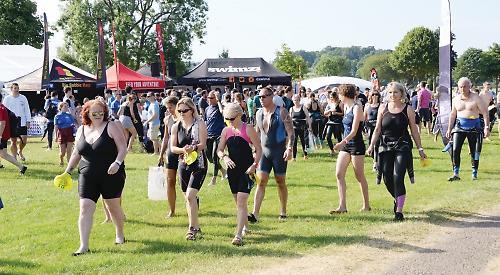 A RECORD 760 swimmers took part in this year’s fifth annual Henley Mile challenge on the River Thames on Sunday.

They followed a straight, mile-long downstream route along the Henley Royal Regatta course, the booms of which were still in place, between a pontoon moored opposite Fawley Meadows and Temple Island.

As well as the mile, there was a half-mile swim and a 200m Henley Splash event from children aged eight to 12, some of whom swam with their parents. Later in the day there was a “suits versus skins” race in which competitors completed the course twice, once in a wetsuit and once in ordinary swimwear, and were ranked according to their total time for both.

Entrants ranged in age and ability from elite swimmers to hobbyists who were taking part in their first open water event. Everyone who took part was chip-timed and had to tap a sensor at the finish line to find out their time.

The swimmers were sent off in waves by Jeremy Laming, co-founder of the event’s organisers Henley Swim, who briefed them from a boat using a megaphone. They were grouped by their experience and were escorted by lifeguards who followed them in kayaks and helped those who were struggling to get out of the water safely.

Spectators gathered to cheer on their loved ones at Temple Island Meadows, where there was a podium for the winners and stalls selling refreshments as well as swimwear and accessories.

The first to finish the regular Mile was 14-year-old Alfie Baum, of Didcot, who completed it in 18 minutes and 22 seconds, followed four seconds later by Antonio Almaraz, 44, who lives off St Peter’s Hill in Caversham.

Mr Almaraz was the winner in the men’s open category for the second year running. He came third in the Mile in 2015 and won that year’s Club to Pub swim from Henley Rowing Club to the Angel on the Bridge in Thames Side.

Third was Olympian Greg Whyte, who competed for Britain in the modern pentathon in the 1992 and 1996 Games and trained comedian David Walliams for his cross-Channel charity swim in 2006.

Also taking part was 17-year-old Henry Bell, of Blounts Court Road in Peppard, who won the junior section of the Henley Swim’s 2.1km Classic race last month. He came sixth in the Mile with a time of 18 minutes and 49 seconds. Levi Francisco-Summers, of High Wycombe, came first in the Henley Splash in two minutes and 32 seconds.

Mr Laming said: “This year went exceptionally well and we were pleased to have another record attendance. We only had about 50 people the first time so it has grown considerably. I think it’s because the sport itself is becoming more popular and the reputation of this event is spreading.

“It’s a beautiful, scenic course, especially with the sunny weather we had this time around. There really aren’t many like it. People also like being able to swim in a straight line instead of following a circuit marked out with buoys.”