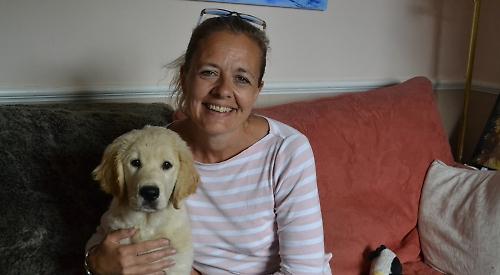 TOWN councillor Sam Evans has a new four-legged friend — and he’s already the talk of Henley.

Thirteen-week-old Hector, a golden retriever puppy, arrived last week and is attracting the attention of passers-by wherever he goes.

Sam, who lives in Reading Road, decided to get another dog after her last companion, Humphrey, passed away in May after a short battle with cancer.

She was rarely seen without the seven-year-old, who was also a golden retriever, as he accompanied her around town and was a regular at Henley Rugby Club.

Sam said: “It was really hard because I didn’t want to be disloyal to Humphrey but I’ve always loved having a dog around.

“He’s an absolute delight and I missed the walks horribly so it’s just fabulous. They are quite short walks down to Mill Meadows at the moment, we do a very gentle 15 or 20 minutes and it’s just to introduce him to other dogs and give him a bit of a run around.

“It took me 50 minutes to get from my house to Market Place just because he made everybody smile and everybody wanted to talk to him and have their photo taken with him. It was just lovely — he’s feeling very adored!”

Sam picked up Hector on Monday last week from a breeder in Stroud, after meeting him for the first time several weeks ago, and visited on a number of occasions before giving him a new home.

She said: “I decided ages ago actually that whenever I had another dog that I’d like the name Hector. I told the breeder and she’s been calling him that. It’s an amazing bond and they only know how to love, that’s in their nature, and that’s not a bad thing to be surrounded by.

“He’s full of mischief, a bit scared of the traffic but he’s getting used to life in Henley. At home I’ve forgotten what it’s like to have a puppy. It’s the absolute extremes – either he’s fast asleep or it’s the mania of playing with his toys and running around or chasing his tail. His character will gradually build and develop and he’s just a darling.

“He’s already been for a coffee in Loch Fyne and he’s had a drink in the Station House but he will be at my side. To my mind that’s why I have him, he should be there with me.”

She added: “Looking at the size of Hector I’ve got a horrible feeling he’ll be even bigger than Humphrey and he wasn’t small!”

Sam thinks Humphrey would have approved, saying: “No dog will ever replace Humphrey, we went through quite a lot together, but it doesn’t me to say I can’t love another dog.”

She added: “I do think if he was still around Humphrey and Hector would have been great mates. Humphrey’s gone but he’ll never be forgotten.”