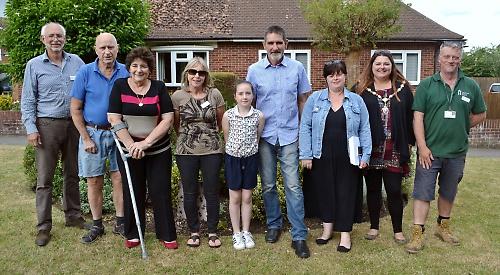 RESIDENTS of the Gainsborough estate in Henley hope to score highly in a national competition for the fourth year running.

Judges for the It’s Your Neighbourhood community awards were shown around the estate off Greys Road last Thursday by town councilllor David Eggleton, who is chairman of the Gainsborough Residents’ Association, and vice-chairwoman Paula Isaac.

Mayor Kellie Hinton, who is chairwoman of the Henley in Bloom committee, also attended.

The awards honour community groups and how they clean and “green up” their surroundings. Assessors David Putt, the chairman of Jealott’s Hill Community Landshare, and Ros Aitken, a former Amersham town councillor, walked around for an hour and were told about the association’s work and its new projects.

These include a voluntary street-sweeping rota and a series of events on Makins recreation ground such as rounders afternoons, family picnics and a party to coincide with the fireworks display on the Saturday night of Henley Royal Regatta.

The association hopes to start working with Mencap, the learning disability charity, to get its users involved in planting and gardening initiatives. It also organises an annual Christmas lunch for the over-60s in partnership with the Soha housing association and a Santa toy run to the Oxford Children’s Hospital.

Councillor Eggleton, the Mayor’s consort, said: “The judges were impressed because a lot of new things have been done since their last visit and more people have done their gardens up than ever before. We’ve got a lot going on and hopefully that will be recognised.” For the past three years, the residents’ association has been awarded “thriving”, the second highest level behind “outstanding”. The results will be revealed at the Thames and Chiltern in Bloom awards in September.

Councillor Hinton said: “David and Paula did a great job of showcasing their achievements and the ways in which the estate continues to grow as a community.”

She added: “Many initiatives that started at Gainsborough, like the history boards at the entrance, are spreading to other parts of the town so the association’s work is proving influential.”