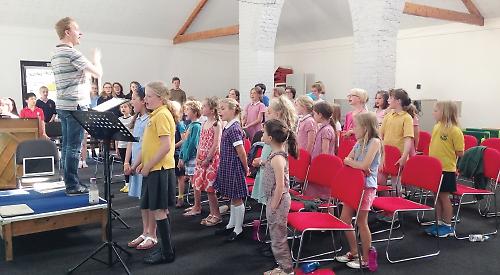 A SCHOOLGIRL who composed a song for this year’s Henley Youth Festival has professionally recorded it with a group of friends.

Chloe Cormack, 11, penned Back To England and performed it with Henley Youth Choir at the festival’s HYF Sing night, which took place at the Kenton Theatre in New Street in March.

She watched by her father Hamish, who is the commander of RAF Benson, her mother Claire and twin brother James.

The piece, which was written for solo, duet and choir with a piano accompaniment, tied in with this year’s festival theme of “journeys” and is about the joy of returning home after travelling.

Chloe, who lives at the air base and attends Stoke Row Primary School, wrote the music and lyrics which were then transcribed to sheet music by Alfie Hay, who is a co-founder of the event.

The choir recorded it as part of a regular weekly rehearsal at the d:two centre in Upper Market Place. The session was taped by Henley Theatre Services, who will mix it and give each child a copy. It was Chloe’s prize for making an outstanding and original contribution to this year’s festival.

Festival trustee and musician Lucie Henwood said: “Each year I award a prize to one or two entries which have really impressed me.

“In past years, it has been guitar playing and dance, as well as singing. Chloe’s song was very catchy and she deserves an extra ‘pat on the back’ for creativity.”

Peter Asprey, the choir’s conductor, said: “We are very proud of Chloe’s achievement and delighted that we could all perform it together at the festival. Hopefully she will inspire other members of the youth choir to start composing.”

Jo Dickson, the festival’s co-chairwoman, said: “The recording went well and was really good fun. Henley Theatre Services just set up some microphones and computers and away they went.

“The children hadn’t sung it in a couple of months but they soon got back into it and they only had to perform it four or five times to get the best take. It was pretty smooth.

Chloe’s mother Claire said: “The children were all invited to make a contribution to the festival and she decided to do it completely off her own back, which is amazing as she was only 10 at the time.

“It was a lovely piece. We enjoy travelling as a family but it’s about how you’re always drawn to come back home in the end. We’re very proud of her and think it shows the wonderful opportunities that are available to children living in this part of the world. Chloe works very hard and we’re pleased to see her rewarded.”

The youth choir, which is part of Henley Choral Society, is welcoming new members and trial sessions are available. For more information, see www.henleychoralsociety.org.uk

Meanwhile, volunteers are being sought for next year’s youth festival, which runs from March 10 to 18.

Help is particularly needed running school art workshops, events at the Kenton Theatre and organising publicity. Anyone who can help should email hyfinfo@gmail.com