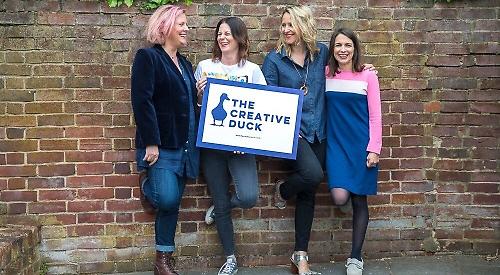 FOUR women from Henley who founded a company to help small businesses say they want to build a “community” for the creative people of the town.

As well as speakers, the company organises workshops for business owners and those looking to start their own company. They are given tips on issues such as marketing and photography and provide a place to meet others.

The company aims to help business owners learn new skills, exchange ideas and to support one another.

The four women all had successful careers prior to moving to Henley and still run several of their own projects.

Mrs Gilbert, 38, grew up in Shiplake, attending the village primary school, before moving on to Gillotts School in Henley and The Henley College.

She says she always wanted to work in the creative industry and started a four-year course in marketing at Northumbria University in 1999 after a year travelling to Bangkok, Hong Kong, Australia, New Zealand, Fiji and the USA.

After graduating, she worked for agencies in London, dealing with companies such as Sony Eriksson in the capital.

In 2007 she took a year off to travel around China, Australia, New Zealand, Bangkok, Mexico, Bermuda and the USA with her boyfriend Graeme who proposed in Bermuda.

She said: “I loved the creative side of working with young people when you ignite their imagination and get that lightbulb moment where they understand things. When I started having my own children I realised the importance of getting them to learn by doing all the stuff that I’d done.”

Mrs Gilbert has three children, Joe, six, Amber, four, and Sid, one, and when the last came along she left teaching and began Box of Smiles, a business which makes small personalised gift boxes for babies and mums, from her home in St Andrew’s Road.

Miss Harris, 42, was born in London but grew up in Shiplake and Wargrave.

She admits it took her a long time to work out what she wanted to do, as she travelled in Asia and worked in London in property management before deciding she wasn’t happy and began pursuing her childhood love of illustrating. She studied illustration at the University of Gloucestershire in Cheltenham, where she ended up teaching a life drawing and sold her flat in London before deciding to move to Henley, where many of her old friends still lived.

Miss Harris then launched Boo Dillon and founded the Henley School of Art last year, all while working during the day at Bagatelle Toys in Bell Street.

Mrs McGinn, 38, grew up in the and had an interest in fashion and travelling as a youngster. She studied French, Spanish and Italian at Durham University, which allowed her to spend years abroad working in Italy, Peru and France.

She did a postgraduate course in journalism at the London College of Fashion in 2003 and her first job was at Bolz magazine in London.

“That was an eye-opener,” Mrs McGinn recalled. “I was a dogsbody working with PRs, taking back samples and getting on buses to find random places but getting to write. It was a brilliant experience.”

She later worked at trend forecaster WGSN and became Europe correspondent, allowing her to travel to cities such as Milan, Paris, and Rio de Janeiro covering shows and writing city guides.

Mrs McGinn husband Mark in 2010 and after having her first child Milo, now six, she went part-time.

The family moved to Henley in 2011, first renting in Friday Street before buying a home in Wilson Avenue.

She had her second child Anya, three, and now runs an afternoon tea hire company called Mrs Min’s Vintage with her sister Louise. The company, inspired by Mrs McGinn’s love of collecting vintage china while travelling, now offers a collection of china and homemade cakes for events, as well as supplying local companies such as Athlete Services in Greys Road car park.

Ms Nott, 38, is from Gloucester and studied textile design at Nottingham Trent University. While she was there she did a three-month internship in New York with Thierry Mugler and, after graduating, she went on to work for Burberry and French Connection in London.

She took a year out in 2008 to travel to central and South America, New Zealand, Australia, Singapore, Thailand, Hong Kong and India with partner Steven Heywood, who is head of technical sales at Henley investment company Invesco Perpetual.

She returned to Burberry for another seven years but resigned last year.

She said: “Every weekend there’s something different that makes us think we are very lucky to be living here. There’s always something going on and it completely suits our lifestyle.”

The idea for the Creative Duck first came about when Mrs Gilbert and Miss Harris met at Bagatelle two years ago.

Mrs Gilbert, who was buying presents at the time, said: “We both live in Henley and are from creative backgrounds and we talked about an idea of setting up something.”

Miss Harris added: “I found that so many people would come in who did creative things in their sheds but didn’t know how to market or make websites. What they needed was an outlet to help them and the community grow. Sarah and I were texting for a year and a half before she rang one day and said it was time.”

Mrs Gilbert said: “About four months ago I decided I needed a new project and it was a good time as my third child was getting easier and Box of Smiles was taking off.

“Jo asked me to come round and I blurted out everything I had in my head. It was a creative place for small businesses and individuals to learn collaboration and support each other. We knew there was a demand for it.”

They recruited Mrs McGinn and Ms Nott, who Mrs Gilbert knew through their children, and came up with the name to give the project a link to the river.

Mrs Gilbert said: “We are putting on talks that people are asking for, we are not charging a lot for them, it’s just covering costs. They are informal but informative.”

Mrs McGinn added: “Sarah and I have our own businesses and there are some things you just don’t know. She can ask me to read this for her or I can ask for advice on packaging. Everyone has a skill and can fill a knowledge gap.”

They held their first talk in when speaker Aspen Weatherburn told more than 60 guests about her business Hello Henley, which helps businesses use social media to promote themselves to customers.

The event, which saw Ms Weatherburn interviewed by BBC journalist Sophie van and then questions from members of the audience, sold out in three days and the women say they were surprised by the reaction.

Ms Nott said: “We were going to do the first event at the art school but we had such a fantastic response that we moved it to Hotel du Vin. We thought we might get 20 people but we sold out of 60 tickets.”

Mrs Gilbert added: “Lots of people told us they needed the event. It was nice to have drinks before and after to chat. Some ladies in Sonning had a cupcake business and needed a graphic designer. They found one at the event so that was great. Henley has a fantastic array of talent so let’s give it a forum.”

Miss Harris added: “I think people were thirsty for it. The creatives of Henley are all in one room and meeting each other. The collaborative aspect is boundless.”

A second talk was held on Monday with photographer Kathryn Fell at Miss Harris’s art school in Hart Street. Mrs Fell, whose real name is Kathryn Willis, will be talking again tonight (Friday), while in September business mentor James Malone will be appearing at Hotel du Vin.

The women say they are excited about the upcoming talks and have lots more ideas of how to expand the company.

Mrs McGinn said: “It’s about getting experience, knowledge and advice. Some are workshops and some are talks with a question and answer session.”

Ms Nott added: “It’s not for profit, we are doing it for education and the good of the community. We will hopefully be inviting people who have made success like shop owners who can form a panel. It’s bringing in successful local people.

“If money was no object we would love to have a workspace in Henley where you can go for a coffee and a pop-up space to sell what we have made. We all have our own projects and families.”

Miss Harris said: “I really want to build a community in Henley to have things like an art festival as it is built around a really strong artistic community. It’s all there, it just needs a bit of ‘oomph’ and support.”

Mrs Gilbert said: “We have lots of ideas, we’ve been trialling surgery sessions where you have a small business around the table with a problem and we present them with ideas. It’s something we are looking to carry on.

“We will grow it with demand and people want to come and help us too, it’s been lovely. It’s been exciting so far and I hope it will carry on.”

For more information or to book tickets visit www.thecreativeduck.co.uk