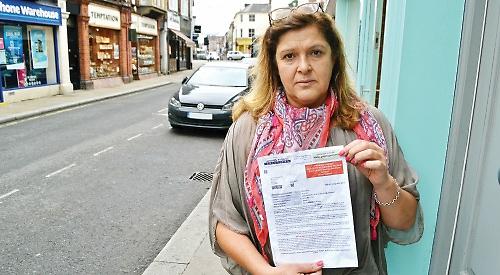 A WOMAN who wanted to make a “fresh start” after her husband’s death was hit with three parking fines totalling £120 within three days of moving to Henley.

Police ticketed Suzy Bannon’s Mini Countryman as she was unloading furniture to her new flat in Bell Street on Tuesday last week. She had parked the vehicle in one of the loading bays and was moving the items into the upstairs property.

The officer who ticketed her car was riding a motorcycle and parked a short distance up the street so she ran to catch up with him and explained she had been using the bay for its intended purpose, not for shopping, but he would not rescind the ticket.

The bays are commonly abused for this purpose, which has prompted complaints from residents and town councillors, and Thames Valley Police have promised to crack down on the problem.

The constable told Mrs Bannon, 52, that he issued the £30 penalty because she had been parked for longer than the permitted 10 minutes, which she denies. She says she was in the flat for a matter of moments and he must have issued the ticket without timing her.

She returned the following morning with a friend to unload a chair, this time leaving her boot open and her hazard lights on. She says the same thing happened with the same officer, who again insisted she was overstaying.

Because of the weight of the items, she says it would not have been possible to park in the South Oxfordshire District Council car park off Kings Road, which runs past the back of her and carry them around to the front.

She paid the fines but intends to complain to the police.

On the third day, she received a £60 “parking charge notice” in the post from London Parking Services, a company which enforces the restrictions at the privately-owned parking bays behind Mrs Bannon’s flat, off Market Place Mews.

She had parked there the week beforehand while visiting the property and wrongly assumed this was allowed as she had purchased a residents’ parking permit from Henley Town Council.

In fact, the permit only allows holders to park in designated on-street bays which are governed by the scheme, which the town council administers on Oxfordshire County Council’s behalf.

It has nothing to do with those private spaces as they are part of the Market Place Mews development owned by Catalyst Capital, of London.

Mrs Bannon said she was confused because the road marking which states that the bays are private was heavily worn. Nearby signs say the bays are for “permit holders only”, although they also explain that it is private land.

She has asked the firm to cancel the charge but is yet to receive a response.

Mrs Bannon was previously living in Wallingford, where she and her husband John had just bought a house with a view to starting a family before his sudden death from cancer in 2007. He became gravely ill and died just three weeks after receiving his diagnosis.

She sold their home and lived in rented properties for a decade while overcoming her grief and contemplating where she wanted to settle. This year she finally decided to purchase the Henley flat as she had lived in the town previously and in Hambleden before that.

Mrs Bannon, who is a project manager and environmental consultant for London engineering firm Arcadis, said: “I rented for a while because I wanted to make the right decision rather than rushing to somewhere new.

“It took a long time to come to terms with my husband’s death but I thought the Henley flat was lovely when I came across it and was very excited at the prospect of moving. I had put a lot of thought into it and decided it would be nice to come back.

“I don’t think it was very nice of the policeman to me when it was obvious that I was moving in. I know it was in the regatta week but I deliberately chose a time before it became busy.

“I know the police have a job to do but I don’t know how else I was meant to unload. I paid out of goodwill and because I didn’t want it hanging over me but I will be writing a letter.

“Meanwhile, I just assumed the private bays were covered by my parking permit, which I bought several weeks earlier because I wanted to do everything properly and not get into trouble.

“I suggest that Henley residents are given a map explaining where exactly the permit parking spaces are, as I didn’t realise the private ones were a separate thing.

“As an environmental consultant, I understand the problems that come with more people owning cars and encourage measures to reduce journeys. I know there are too many cars on the road in Henley but if you’re just moving into a property and need to carry your items in, you’d think people would have the common decency to allow that.

“I suppose with age and experience I can laugh about this, but someone 20 years younger and with less money could be pretty devastated. It’s pretty horrific and it feels very grasping and aggressive from everyone concerned. You wonder why they can’t be nicer and more flexible.”

Henley Mayor Kellie Hinton said: “I can sympathise with Mrs Bannon as it’s easy not to think clearly when you’re stressed.

“We’re all only human and this sounds like a genuine mistake but in the case of the private bays the enforcement company may well have a valid case. The signage does state that it’s private land.

“The town council uses the same firm on land it owns and it generally works. Unfortunately, lots of people aren’t making a mistake but deliberately park there when they know they shouldn’t and the company has a hard time deciding each case. It’s a fine line and ultimately it’s not appropriate for me to judge.

“As for the loading bays, all I can say is that we haven’t had that complaint before. There is a serious problem with people abusing them and if delivery lorries can’t park in the bays, they often park on the pavement and create mini-traffic jams.

“This is usually enforced by police community support officers and they’ll typically wait a few minutes in case somebody has a legitimate reason to be parked there.”

London Parking Services did not respond to a request for comment.