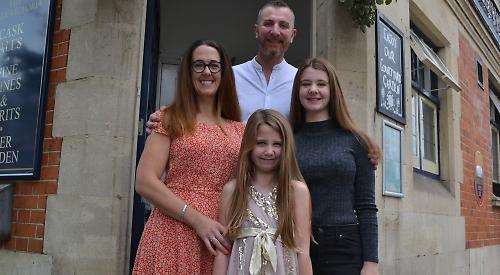 A LANDLORD who transformed the reputation of a Henley pub has said farewell after more than four years.

Nick Cobb, 43, held a barbecue event with live music at the Queen Victoria in Market Place on Sunday.

He and his wife Lesley arrived at the pub in February 2013 and quickly set about rebuilding its poor reputation and creating a more welcoming bar atmosphere.

Mr Cobb said: “The pub has been a massive part of our lives. We have invested all our efforts into it and our personalities are stamped all over the place.

“It’s a fabulous drinkers’ pub — we’re Henley’s last proper boozer. You get visitors from out of town, saying there is a proper pub in Henley, not one where you have to move the wine glasses and cutlery off the table.”

Mr Cobb said he was particularly proud that the pub had staged live music events every Friday evening and screened big sporting events such as the World Cup and European football championships.

The couple and their daughters Emily and Adeline have lived above the pub during their tenure but will now move back to their home in Peppard Common.

Mr Cobb would not reveal what he planned to do next but said it would be a complete career change, having worked in the pub industry for about 15 years.

He said: “We’re leaving because we’re choosing to. We always had a five-year plan and I always said this would be my last pub.

“As we’re getting older we’d kind of like a garden — we need a bit of our lives back. We’re going to miss the social side of it, all of the great friends we have made, the family of the Queen Vic — they know who they are. The only thing we won’t miss is the hours!”

Mrs Cobb, 40, who works as an operations manager for a tool company, said: “It has been great to bring up a family here.

“When I’m not working then I’m here. You can’t live in a pub and not have it consume everything you do. I’ll miss coming home from work and having everybody in the bar asking how my day was.”

Before the couple arrived, the Queen Victoria had been closed following complaints by police about licence breaches.

Mr Cobb said: “When I took this pub over I stood behind the bar for three days and I didn’t see a customer.

“We had a zero tolerance policy and I was unwavering with my moral compass. We asked everyone to conduct themselves in a civil and gentlemanly manner and I led by example.”

Mrs Cobb added: “This pub had a bad reputation with the police, the community and with local residents and nobody wanted to come here.

“What Nick has done here and the reason it is successful is because he has gone old school with it. People come in and drink on their own and they become part of the conversation around the bar.

“It brings people in and puts them in touch with each other the way old community pubs used to be. He has got this whole diverse mix of people from all walks of Henley life.”

Mr Cobb previously ran River and Latinos nightclub in Hart Street with his father Mike. He also ran the Prince of Wales in Caversham and the Bull at Barkham, near Wokingham.

The Queen Victoria, which is owned by EI Publican Partnerships, formerly Enterprise Inns, is set to be taken over by Jamie and Marnie Liston, from Bracknell.