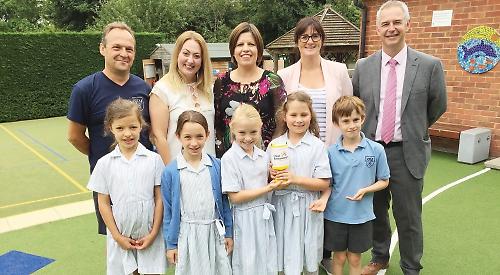 PUPILS and staff at St Mary’s School in Henley raised £1,300 for Child Bereavement UK with a number of events, including a cake sale, raffle and school show by year six.

A cheque was presented to Ruth Sanger, from the charity, at a school assembly. Morag Broom, who chairs the Friends of St Mary’s, said: “Child bereavement affects more people than you realise.”

Ms Sanger, who gave a talk at the school earlier this year, said: “The money will be used to support families with face-to-face support, group support, a national information line and groups where families and children can meet other people. We don’t receive statutory funds so support from the public is vital for us.” Pictured, back row from left, Gavin Dickason, site maintenance manager, Ruth Sanger, of Child Bereavement UK, Morag Broom and Maria Lawrence, of the Friends of St Mary’s School, and headteacher Rob Harmer. Front, from left, Olivia Borlase, Lily Whittam, Chloe Thomas, all nine, Martha Peach, eight, and George Verry, nine