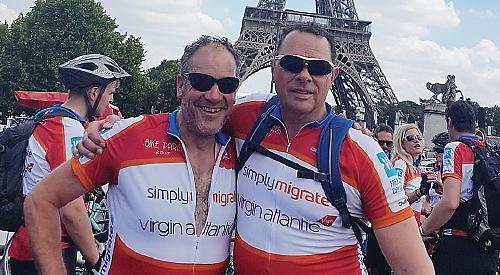 A HENLEY businessman cycled 206 miles to Paris for charity.

Caleb Southwell, who owns printing and copying firm IBS Office Solutions, off Gravel Hill, completed the journey in three days with his friend and account manager Andrew Walker and about 40 other cyclists from around the UK.

So far, the pair have raised more than £1,000 for Alzheimer’s Research UK, which they chose as both have family members affected by the disease, and international youth development charity WE.

Their sponsors include Henley Mayor Kellie Hinton, who is a telemarketing manager at IBS.

Mr Southwell, 50, from Aston, was invited to take part just over three months ago by 54-year-old Mr Walker, from Twickenham, who completed the same challenge several years ago.

The pair have known each other since working together at a print company in London more than 30 years ago.

The riders set off from Crawley at 5.30am on July 14 — Bastille Day — and cycled 34 miles to Newhaven in East Sussex before catching the ferry to Dieppe and then riding another 34 miles inland. The cyclists, who were accompanied by a support crew carrying food and water, stayed overnight at a hotel and then cycled another 88 miles towards their destination the next morning.

Mr Southwell, who had bought his £300 road bike off the internet, became lost at one point after riding ahead of the pack and misreading a sign, which added 10 miles to his journey.

Following another hotel stay, the cyclists rode 40 miles through the suburbs of Paris and the Champs-Elysées to the Eiffel Tower, where Mr Southwell was greeted by his wife Jo, founder of the Henley Fringe and Film Festival, and their daughter Lorelei, seven.

They ate dinner at a restaurant and spent the following morning sightseeing before flying home.

Mr Southwell said: “To be honest, I’ve never particularly liked cycling — after riding to and from Gillotts School every day as a schoolboy, it just didn’t excite me.

“However, Andrew wanted me to get involved and I thought I should do something useful and worthwhile. I was feeling pretty confident by the time we set off as I’d done quite a few long training rides, though it was still very tiring and I was glad to get into bed at the end of each day.

“We were supposed to do the first stage to Newhaven in three-and-a-half hours but boys will be boys and it got a bit competitive so we did it in just over two.

“However, I should probably have stayed with the group because the following day I came across two signs to Paris pointing in different directions and I chose the wrong one.

“I realised I was lost after about five miles so I turned around and cycled back.

“It made our longest day even more difficult but it was worth it for the sense of achievement that came from cycling almost 100 miles.

“I was pretty elated to finish as my wife ran the London Marathon for Alzheimer’s Research earlier in the year, so I felt like between us we’d put on a pretty good show for the cause.

“After a few glasses of wine, it even struck me that I could ride from Land’s End to John O’Groats but I think that’s one for next year!”