Mayor shows she's green when it comes to bowling 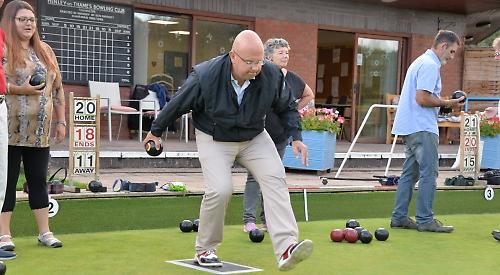 THERE was plenty of bias when Henley town councillors played their annual crown green bowls match.

Members of both Henley Residents’ Group and the Conservatives took part in the competition for the Tony Lane Trophy at Henley Bowls Club in Mill Meadows.

They were split into five teams with club members and played for about an hour-and-a-half before the match was declared… a draw!

Councillor Hinton said: “Turns out I’m not very good at it whatsoever. We didn’t provide a game really but certainly provided the entertainment. I was definitely the best at being the worst.

“Glen and Dave were fantastic, they did really well. The rest of us were terrible. I kept knocking Ken’s bowls out of the way.”

She added: “It was really good fun and it’s lovely for me as Mayor to support the bowls club. They have got a wonderful facility and they love to make us feel welcome and we love to go every year. As Mayor, I’ll make more of an effort to get to some of their matches.”

Councillor Hamilton said: “There’s always a bit of rivalry between councillors. I was very careful not to drop a bowl on Ken Arlett’s foot!

“I wore my bowling shoes as I didn’t want to be underdressed given that the Mayor was there.”

Councillor Gawrysiak said: “It was a fun, jokey and humorous evening. We had lots of laughs and lots of banter.

“We received expert coaching from members of the club but I still wasn’t very good and will certainly stick to being a town councillor!

“It’s absolutely brilliant that we have this annual match. They are a wonderful group of people at the bowls club who look after this lovely piece of land on behalf of the council and keep it beautiful and pristine.”

Councillor Arlett said: “It brought back memories as we used to play when I was on the council before so I was quite looking forward to seeing if I was as good as then. I think the main thing about bowls is making sure you get the bias in the right direction.

“The match was, amazingly, very friendly and good fun.

“I quite enjoyed playing against Will Hamilton and I beat him with my last bowl!”

After the match the players enjoyed a fish and chip supper provided by JK Fish and Chips in King’s Road.

Andy Scott, vice-captain of Henley Bowls Club, said: “There were about a dozen members of the club taking part. It’s a nice social evening and a good
tradition.

“We keep scores but, funnily enough, the match always ends up being a draw. We have a trophy we play for but it is kept safe in our clubhouse.

“It’s a shame some of the councillors don’t have more time on their hands because some of them would make quite good bowlers.”

The trophy is named after Mr Lane, a cobbler who was a Conservative member of the council between 1965 and 2002 and mayor for a record four terms. He died in 2014, aged 87.