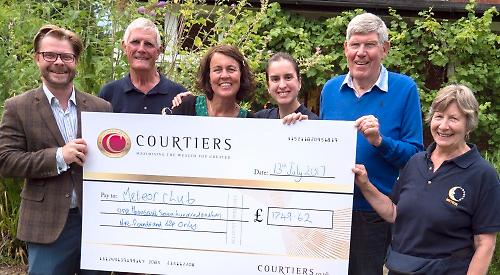 A cheque for almost £1,750 has been donated to the South Oxfordshire Mencap Meteor Club.

Money raised by staff at Henley wealth management company Courtiers over the last 12 months was then doubled by the firm.

More than £600 was raised on the opening day of this year’s Henley Royal Regatta when about 20 staff from the company’s offices in Hart Street took part in a 90-mile on ergo machines in Market Place.

The team beat their target of 74 miles, which is the distance between their Henley and Witney offices and back again. Other events included a Halloween costume competition and a Christmas jumper competition.

The cheque was delivered by Leo Hallam, brand and marketing manager at Courtiers, to representatives of the charity.