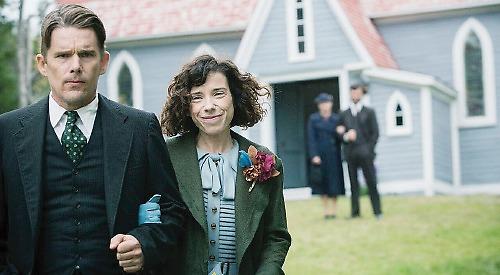 LIKE the masterpieces they produced there is often more than meets the eye in bringing the life stories of artists to the big screen.

Far more than a simple chronological plod through their lives, these biopics strive to offer a far deeper insight into the genius behind the art.

Very often these films descend into a an exploration of the deep-seated emotional issues that characterised the lives of so many of these people, leaving a trail of broken relationships in their brilliant, but tortured, wake.

This week the life of folk artist Maud Lewis gets the cinematic treatment and the unlikely romance that blossomed between her and a hardened reclusive bachelor, Everett Lewis. Maud, (Sally Hawkins) a bright-eyed, intelligent woman, hunched with crippled hands from arthritis, yearns to be independent and to live away from her overly protective family.

She escapes her solitary existence in her aunt’s home through her art, dreaming away the days, until in her early thirties she finds and answers, an advertisement for a housekeeper. Everett Lewis, played by Ethan Hawke, is a 40-year-old bachelor who owes nothing to anyone.

Tall, skinny and shabby, abandoned by his parents at a very young age, he has nevertheless managed to become a proud and self-sufficient man, largely by collecting scraps and peddling fish.

He lives in a 10x12 ft house that has neither running water nor electricity, but at least it’s all his. His is his own boss and has everything he needs, except maybe a woman to clean the house and cook his meals.

When Maud answers the ad, Everett is reluctant at first. But she is determined and refuses to leave, so he hires her. To begin with this is no match made in heaven. However, over time, Everett starts to need Maud. Her determination for her art, along with her partnership with Everett, blossoms into a career as a famous folk artist, bringing them closer together in ways they never imagined.

This is both a character study and a romantic drama tinged with sadness and emotional anguish.

Without giving too much away it is a far cry from the fairytale endings we have come to expect from Hollywood.

Director Aisling Walsh, despite having just a handful of film credits to her name, has created a bittersweet story that is likely to find fans with little difficulty.