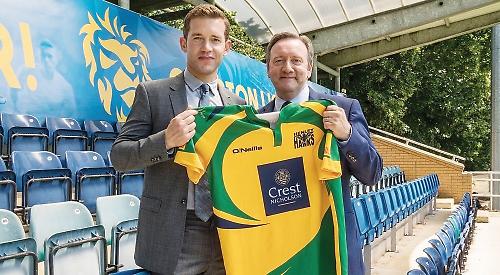 ROBERT HARDY’S love of the countryside and its inhabitants extended well beyond his portrayal of Siegfried Farnon in All Creatures Great and Small.

The actor, who died last week at the age of 91, lived for more than 20 years at Upper Bolney Farmhouse in Harpsden.

He became firm friends with villager Susie Pragnell, who remembers his love of horses and also recalls enjoying farmhouse suppers with the star and his wife Sally.

On one occasion Hardy invited the entire cast of the hit TV series to his home for lunch and then took them along to open Harpsden village fete.

Susie, who now works as an equestrian talent spotter, says: “I’ve never seen so many people come to the village fete — it was quite unbelievable.

“The cast were terrific. They spent the whole afternoon talking to the children and signing autographs. It was the most memorable Harpsden fete any of us can recall.

“I guess I knew the Hardy family and Tim — we always knew him as Tim — for the entire time they lived at Upper Bolney Farmhouse with their daughters, Emma and Justine.

“I had lots of dealings with him because they became great friends. Tim was very involved in our local community and he was a good man to have in the village.

“He was an incredibly kind man. I went travelling in my late teens and he volunteered to come and pick me up from the airport. He was never boring but he did have a pretty quick temper!”

Susie says Hardy’s love of horses would, on occasion, land him in trouble.

She recalls: “He had a really naughty horse called Blazeaway — it was a bit of an unruly beast. He took him to a point-to-point event and, poor man, the horse bolted right at the start and did a complete circuit of the race course on its own with Tim trying to pull it up. There were a lot of press there and a lot of headlines in the paper the next day!

“He bought various horses. One was called Worthington and unfortunately Tim was out riding when he had a nasty fall around Harpsden Woods and broke his hip while in the middle of filming Elizabeth R. That held up filming and I think there was a clause put in his contract that said ‘no riding’ while he was filming in future.”

The Pragnells and the Hardys took the horse to the Wylye horse trials in Wiltshire where the actor acquired a whippet that he named after the village and became the family pet.

On another occasion the Pragnells had been away and returned home to find Hardy repairing their lawn with a fork after failing to heed Susie’s advice.

She explains: “Tim fell in love with a horse we owned called Jolly. He was desperate to have this horse but I said, ‘he’s not suitable for you’.”

The actor persuaded her to let him view the horse while she was away but she urged him not to open the stable door as the horse had “naughty manners” and would barge out.

When the Pragnells got back they found Jolly had escaped and galloped all over their garden.

“Tim was repairing the lawn or trying to because it did look an awful mess,” says Susie. “It looked like it had had the Charge of the Light Brigade all over it! He was incredibly apologetic —  he was a lovely man.”

She also remembers Hardy’ s numerous portrayals of Winston Churchill, saying he always immersed himself in the role.

“He used to write us notes signing himself ‘Churchill’. You had difficulty separating one from the other,” she recalls. “I was lucky enough to go to his 60th birthday party in London for about 30 to 40 people and it was lovely. The two actor Fox brothers and the great and good of the acting world were there.

“Although he enjoyed All Creatures Great and Small, he didn’t want to be remembered purely for that. He felt it was rather light and frothy acting.”

After leaving Harpsden in the late Eighties, Hardy moved to Scotland and then came back south to live at Cornbury Park Estate, near Charlbury in the Cotswolds, in later life.

Hardy left his mark on his home in Harpsden, where he kept about 20 long bows salvaged from the wreck of the Mary Rose in the cellar.

When he extended the property, he instructed the architect to the put the letters “R H” about 4ft high in one of the wall timbers.