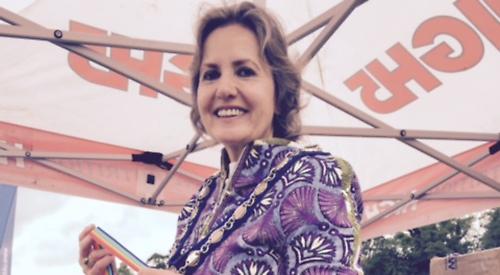 THE Deputy Mayor of Henley has been kicked out of the local branch of the Conservatives after more than a year of internal disagreements.

Lorraine Hillier was expelled following in-fighting which culminated in her refusing to support party colleague Will Hamilton at the mayor-making ceremony in May.

She says she will appeal against the decision, claiming the branch acted beyond its remit. She still represents the Conservatives on South Oxfordshire District Council and remains a member of the national party.

Councillor Hillier, who was a member of the branch for 18 years, said: “I’ve been very faithful to the Conservative Party and I still am. I do respect the party.”

Branch officials said her decision to effectively stop the Tories retaining power of the town council at mayor-making was the final straw and that she had previously offered to resign. She abstained from the mayoral vote, allowing Kellie Hinton, of the rival Henley Residents’ Group, to secure the job and her party to take control.

In a further twist, Councillor Hillier then accepted a nomination by HRG to be Deputy Mayor.

Since then she has been sitting as an Independent Conservative, saying she had been “ostracised” by her former colleagues.

The decision to expel her from both the branch and its organising committee was made last month when the committee voted unanimously in favour of motions put forward by new branch chairman Frank Browne.

Mr Browne, a PR executive from Rotherfield Greys, met Cllr Hillier on July 14 to discuss her relationship with her colleagues.

He said: “She went through in quite a lot of detail the issues she felt could have been handled differently and those issues ran over a period of 12 to 18 months.

“At the end of that she made it very clear that she didn’t see a way back to the Conservatives and she was unlikely to stand again in 2019 when her term on the town council ends.

“I asked her whether she felt it was appropriate that she continued as a member of the branch committee.

“She felt at that time that it probably wasn’t appropriate and then I asked her whether she felt it was appropriate that she continued as a member of the branch.”

Mr Browne said Cllr Hillier agreed to resign and to put this in writing.

However, he didn’t receive her resignation and on July 20, the day of a branch committee meeting, she emailed him to say that she had changed her mind about quitting.

He replied asking for an explanation but said he never received a proper response, which left him in a “quandary”.

Mr Browne said: “I wanted to draw a line underneath the whole saga and I explained in a subsequent email to Lorraine that to me there were two clear courses of action.”

One option was to “find a way to rehabilitate her into the Henley Conservative team” and the alternative was to “find some way of closure which would allow the branch to move forward and not be constantly distracted by her continuing membership”.

Mr Browne’s motions to remove her from both the committee and branch were discussed and then passed. He then wrote to Cllr Hillier to notify her of the result.

He said: “I would have preferred her to have resigned amicably from the committee and the branch, allowing the branch to move forward with the very clear role of understanding why we lost so badly in May and look at reconnecting with the residents of Henley. My understanding is there had been unhappiness between Lorraine and various members of the Conservative group for some time so I think this has been rumbling on.

“The mayor-making was, I think, the culmination of some of that unhappiness. I think there’s a strong feeling of unhappiness and disappointment with the actions that she took, which effectively allowed the opposition group to take control of the council.”

Julian Brookes, leader of the Conservatives on the council, said: “The mayor-making was just one incident, perhaps it was the tipping point.

“The objective of the association is to secure the return of Conservative candidates at elections. Of course you have a democratic right to vote as you see fit but in the exercise of this right, if you’re directly conflicting with the objectives of the group, you have to consider your position and that really is the nub of this situation.

“The branch is not responsible for council matters but it is responsible for the group as a whole. If the chairman sees members conflicting with the aims of the group, it’s his duty to do something about it.

“I’m disappointed these steps have had to be taken. It’s never very pleasant to have to go through such a process but I think you can’t leave things rumbling on.

“I think the chairman was right to have this discussion at the branch meeting and communicate very carefully with Lorraine on the outcome.

“I’m never glad to see the back of somebody, I’d much rather we’d achieved some reconciliation but I think we’re beyond that. As far as the party is concerned, it cost us the mayorship.”

Councillor Hillier said her actions at mayor-making were not the branch’s concerns.

“The branch is responsible for elections, for its membership, for fund-raising, but not for council matters,” she said.

“I will appeal because I don’t think the proposals were justifiable reasons for removing me from the branch and it has involved itself in council matters when it’s not supposed to.

“I feel very sad because I was very close to [former branch president] Peter Sutherland and at one time I was vice-chairman of the branch. I was also treasurer and I was on the executive when we chose Boris [Johnson] as our MP. I have been very deeply involved with the Conservatives.

“At the meeting apparently it was said some members wanted to punish me after what had happened. I didn’t see that coming. I just thought that things would get better and sort themselves out.

“I still wish to be a member of the Henley branch because I represent Henley at district level.”

Cllr Hillier confirmed that she had agreed to resign at Mr Browne’s request but then had second thoughts.

“I thought it would look wrong,” she said. “It would be a dereliction of my duty as a Conservative to leave the branch.

“I still feel aligned to the Conservative Party. I did think, ‘why am I the one that needs rehabilitating?’ There were faults that caused me to be ostracised that weren’t all my own doing.”

Cllr Hillier, who was mayor two years ago, claimed that she had been treated differently by her Tory colleagues after accepting a nomination from HRG to serve a second term.

“It finally came to a head this year when there were the two by-elections,” she said. “These were both won by HRG so in my mind that was a vote for change. I would not vote against the Conservatives and wouldn’t vote for HRG so that’s why I chose to abstain [at mayor-making].”

After the ceremony, Cllr Hillier denied any wrong-
doing or making a deal with HRG in order to secure the role of deputy mayor and claimed she had even been offered the role by the Conservatives.

She later revealed she had been threatened and that her Henley businesses, the Hot Gossip coffee house in Friday Street and the Upstairs & Downstairs tea shop in Duke Street, which has since closed, were threatened with a boycott.