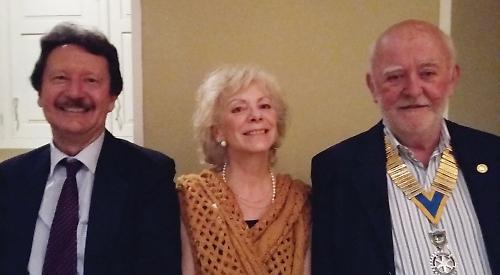 TALES of a childhood spent in Cambodia, Africa, Germany and France were at the heart of Noelle Morgan’s talk to Rotarians last week.

Noelle and her husband Andrew recently joined the club and, as newcomers, were asked to give an informative outline of their lives and careers to date.

Noelle, who spoke first, was born in Africa to French parents. Her father, a marine engineer, was required to settle in many places around the world in connection with his work. Before finally returning to France, his last posting was to Djibouti in the Horn of Africa.

Once back in France, Noelle achieved an MBA in law while working as an assistant teacher in Paris to pay for her studies.

She was, and still is, an avid student and even today speaks six languages.

After a spell with KPMG, she moved to England where she has lived ever since and brought up four children, all of whom have interesting and diverse careers.

Among her hobbies are golf and bridge.

Andrew could not match his wife’s experience of far- flung childhood homes in his talk, but he spoke movingly of his upbringing in South Wales and his inspirational father, an optician and jeweller.

There were also cameos of family members who were sea captains, sailing out of Swansea, for generations.

After summarising his upbringing and sharing memories of his close family and forebears, Andrew told how he left home in Neath to study at University College Hospital, London.

He qualified as a dentist and after graduation practised at clinics in the Old Kent Road and Westbourne Grove.

Later he ran his own practices in Bracknell and Maidenhead, finally opening a clinic in Duke Street, Henley, in 2004 which he ran until his recent retirement.

Andrew entertained us with stories about some of the celebrity patients who had attended his surgeries over the years.

He also explained how he managed to calm children scared of visiting the dentist. One of his tricks was to blow air into surgical gloves to make amusing balloon shapes.

Andrew spoke briefly of the career choices of his grown-up children. He also mentioned that his hobbies are cycling, diving and fishing and he has a passion for gardening, which he shares with his wife.

The Rotary Club of Henley Bridge meets at Badgemore Park Golf Club every Wednesday at 7pm for 7.30pm.

Members also meet for an hour-long breakfast session at the club on the second and fourth Thursday in the month (7.45am for 8am).

Anyone interested in Rotary would be made most welcome. For more information, please call Annie on 07769 687326.