MiniMonkie reveals all... well, almost all 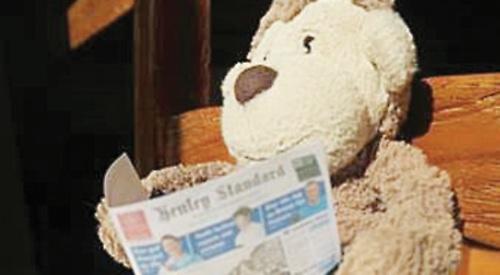 HENLEY’S famous publicist has revealed himself, using only a copy of his favourite newspaper to conceal his modesty.

MiniMonkie, the Henley chimp, has contacted the Diary after we revealed his love of our town last week.

He says: “What? No photo? As a handsome MiniMonkie, I would have expected a photo to show my good-looking profile!

“Surely, a picture of me reading the Henley Standard would be the most suitable picture... although naked! Don’t most of your readers read the Standard in the nude?

“I am an independent MiniMonkie who has only a ‘man servant’. This person is my tailor — for my fabulous fashion creations — chauffeur, cook etc and I pay him peanuts... but, of course, the minimum wage!

“As an ‘immigrant’, I love to document the goings-on in Henley.

“Looking forward to being invited to write a weekly column in the Henley Standard (with pictures). Surely, I’d do a much better job than those other chimps who work there?”

However, I can reveal he won’t be getting the job.

On closer inspection of his supplied photo, it appears MiniMonkie is a bit behind the times as he is reading an edition of the paper which is almost five months old — and the picture looks suspiciously like it has been digitally altered.