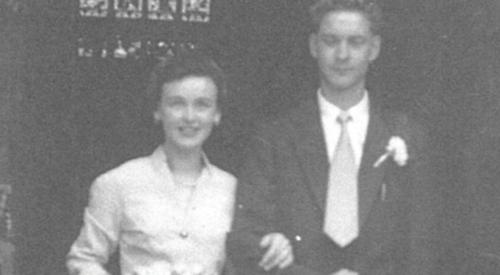 A COUPLE from Henley who met at a police dance have celebrated their diamond wedding anniversary.

They celebrated at home with drinks and cake along with their son Kevin, his wife Sue and their grandson Thomas, 15.

They received a card from the Queen, saying: “I am so pleased to know that you are celebrating your diamond wedding anniversary on August 10. I send my congratulations and best wishes to you on such a special occasion.”

The couple first met at the dance at Henley town hall in November 1952.

Mr Crockett, 85, said: “There were quite a lot of dances at that time. After the war everyone went out dancing either to the Catherine Wheel or the town hall.

“The police dance was always in November and Ursula was there with two friends so I asked her to dance.

“I asked her out and she said she was busy and the second time I asked it was the same but the third time she agreed and we went to the cinema.”

Mr Crockett has lived in Henley almost his whole life. He was born in Bell Street in 1932 and went to school until he was 14 when he left to train as a mechanic at Bell Street Motors.

He only left the town to do his two years of national service from 1950 to 1952 during which time he also worked as a mechanic.

When he returned, Mr Crockett worked at the Tabbitt crash repair centre in Mill Lane, which is now based in Newtown Road, where he stayed until 1983.

He then trained as a driving instructor, which he did for more than 20 years before retiring.

Mr Crockett said: “I always worked in the motor trade. You could say I had oil in my veins!”

Mrs Crockett, 86, was born in Breslau in what was then East Germany and is now  Wroclaw, Poland. She came came to England in 1949.

“I did not like the work on offer there,” she said. “The only option for me was mucking out pigs so me and two friends decided to come to England to get jobs as au pair girls.”

Initially she looked after two boys in Devon but when the family emigrated to New Zealand and she was not eligible for a visa, she moved to Highmoor  to help look after an older lady living alone. In the five years the couple were courting, she would cycle from Highmoor to see Mr Crockett.

She also took him to see her parents in East Germany.

After they were married, the couple rented a house in St Mark’s Road before moving into Mr Crockett’s family home in Greys Road in 1959.

They stayed there for almost a year before buying their first home in Albert Road. Their son was born in 1962.

Mrs Crockett, who is known as Ulla to her friends, said: “Before Kevin was born I was still working for the lady in Highmoor because she had moved down to Lambridge Wood Road in Henley but after he was born I stayed at home.”

She returned to work as a lunchtime supervisor at Trinity Primary School in Vicarage Road when her son began attending. She went on to work there for more than 30 years.

In 1987, the Crocketts moved to St Mary’s Close, where they have remained.

Mr Crockett said: “You work at a marriage, which is not known so much today. We have our ups and our downs but we work at it together. can say I have had a good life with a very nice woman and she would probably say the same about me.”